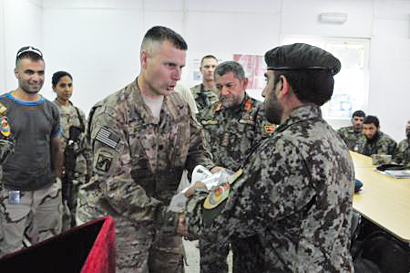 Sylvester native and U.S. Army Lt. Colonel Michael Acord was on hand and actively participated in the graduation ceremony of 101 Battlefield Medics from the 201st Corps Afghan National Army on July 21st.
As Deputy Commanding Officer for the 4th Brigade Combat Team, 10th Mountain Division, Lt. Colonel Acord is involved in promoting the self reliance of the Afghan National Army through training and educating soldiers in ways that will help them become a self-sustained and free-standing entity. While the first graduating class of battlefield medics is a tremendous accomplishment, it is a stepping stone for the 201st Corps who will move forward toward the next cycle of training students from the Afghan National Police, the Afghan Uniformed Police and the Afghan Border Police.
By cross training Afghan agencies it will increase working relationships and allow for assistance to be given in a greater capacity. With the medical knowledge gained, the battlefield medics will be able to assist with saving the lives of their fellow soldiers as well as increasing the development of the Afghan National Army overall.
As American soldiers like Lt. Colonel Acord work side by side with the Afghan National Army as well as other Afghan agencies, it lays the necessary foundation to bringing Afghanistan one step closer to becoming a strong independent nation and their work should be commended.