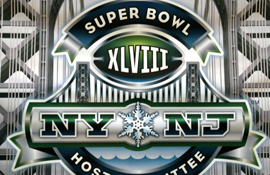 Football fans are getting ready for Super Bowl XLVIII! Food, commercials, the half-time show and of course the football game is enough to get anyone pumped up for Feb. 2.
This year’s Super Bowl XLVIII is a face-off between the American Football Conference (AFC) champions the Denver Broncos and the National Football Conference (NFC) champions the Seattle Seahawks in a battle to decide the National Football League (NFL) champions for the 2013 season. This year’s bowl will be held at MetLife Stadium at the Meadowlands Sports Complex in East Rutherford, New Jersey, with kickoff scheduled for 6:25 p.m. EST.
Here are some little-known facts about the upcoming game. This will be the first Super Bowl to be played outdoors in a cold weather environment, the first played on Feb. 2, the first to be played outdoors on artificial turf  since Super Bowl X at the Miami Orange Bowl. It’s also the first in which two U.S. states (New York and New Jersey) will share hosting duties. It’s also the first time since Super Bowl XLIV, and just the second time in the past 20 seasons, that the #1 seeds from each conference will meet to decide the championship. The game will feature the league’s top offense (Denver) vs. the top defense (Seattle), which has not occurred since Super Bowl XXXVII.
Fans love planning the infamous Super Bowl party, complete with friends, food, food and more food. From chips and dip to cheese balls and sausage balls, to pigs in a blanket, the possibilities are endless! Unfortunately, Velveeta has stated there is a cheese shortage, so some of your favorites might not make it to the buffet this year. Though the reason for the shortage has not yet been released, Kraft thinks it’s more noticeable because of all the holidays and celebrations from November through February.
While enjoying your snacks and watching the Super Bowl, these commercials  grab the attentions of fans and even of those not so fond of commercials. Businesses are  reportedly paying an average of $4 million per 30-second advertisement. The audience levels for the commercials are actually higher than for the on-field play itself. Last year’s match-up attracted 109 million viewers.
Not to mention, Super Bowl commercials in particular have staying power from all the pre-game and post-game discussions about them. Super Bowl viewership has risen since the first game, more than tripling since 1967.
And no one wants to miss the halftime show. This year’s lineup is set to be phenomenal. Bruno Mars and The Red Hot Chili Peppers are scheduled to perform, and maybe even some surprise guests. The Band Perry and Phillip Phillips will present the pregame show. There will also be performances by members of the casts of Broadway productions’ Jersey Boys and Rock of Ages. Several will be performing as part of the NFL tailgate party and some of their performances will be televised.
And last but definitely not least, the Super Bowl game itself promises to be a nail-biter.  The Denver Bronco’s and the Seattle Seahawks are forecast to bring a game that will not  soon be forgotten. The Bronco’s are 13-3-0 and first in the AFC West and the Seahawks are 13-3-0- and first in the NFC West. So Bronco fans, Seahawk fans… GET READY!!!