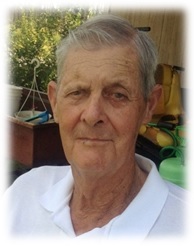 Born August 22, 1931 in Kissimmee, FL, he was the son of the late Charles and Agnes Bland Rollins, Sr.  He lived many places while serving in the US Navy, retiring after 22 years as a Rank E-9 as an engine mechanic.  He served in the Korean War and had also worked at the White House and Camp David under President Richard Nixon.  After retirement, he moved to Dade City, FL where he was a citrus grove manager, managing the most trees in Pasco County, FL.  He then moved to Millwood  in 2010.  He was of the Baptist faith.

In addition to his parents, he was preceded in death by his wife, Kathleen Rollins.

A funeral service will take place Thursday morning at 11 AM in the chapel of Hart Funeral Home. Burial will follow in Shady Grove Cemetery.

The family will receive friends one hour prior to the service.

Sympathy may be expressed by signing the online registry at www.hartfh.com.

Hart Funeral Home of Blackshear is in charge of arrangements.