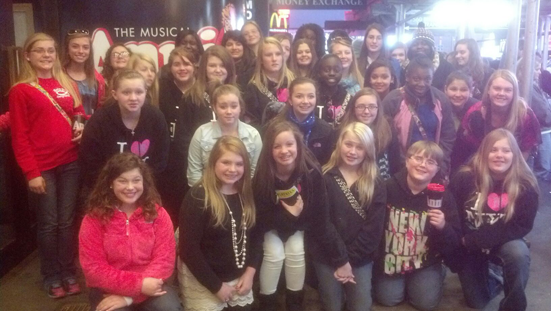 WCMS Treble Choir traveled to New York City April 4-7 and participated in the Festivals of Music New York Competition where they received outstanding scores and comments from the judges and received FIRST PLACE in the Middle School/Junior High division. The students and chaperones toured New York attractions such as Central Park, Times Square, Top of the Rock, and Rockerfeller Plaza. They took a trip over to Hoboken, NJ where they had a private tour at Carlos’s Bakery, famed from “The Cake Boss” tv show. The bakery employees took time to visit and take pictures with the group. The students visited the 9-11 Memorial Plaza and took a harbor ride around the Statue of Liberty, Ellis Island, and the Washington and Brooklyn Bridges. The finale of the trip took place at Engine Co. #7 where the choir gave a private concert for the firefighters and paid tribute to them. The WCMS Treble Choir and their director, Lesli Holton would like to thank all those who helped them travel to New York.