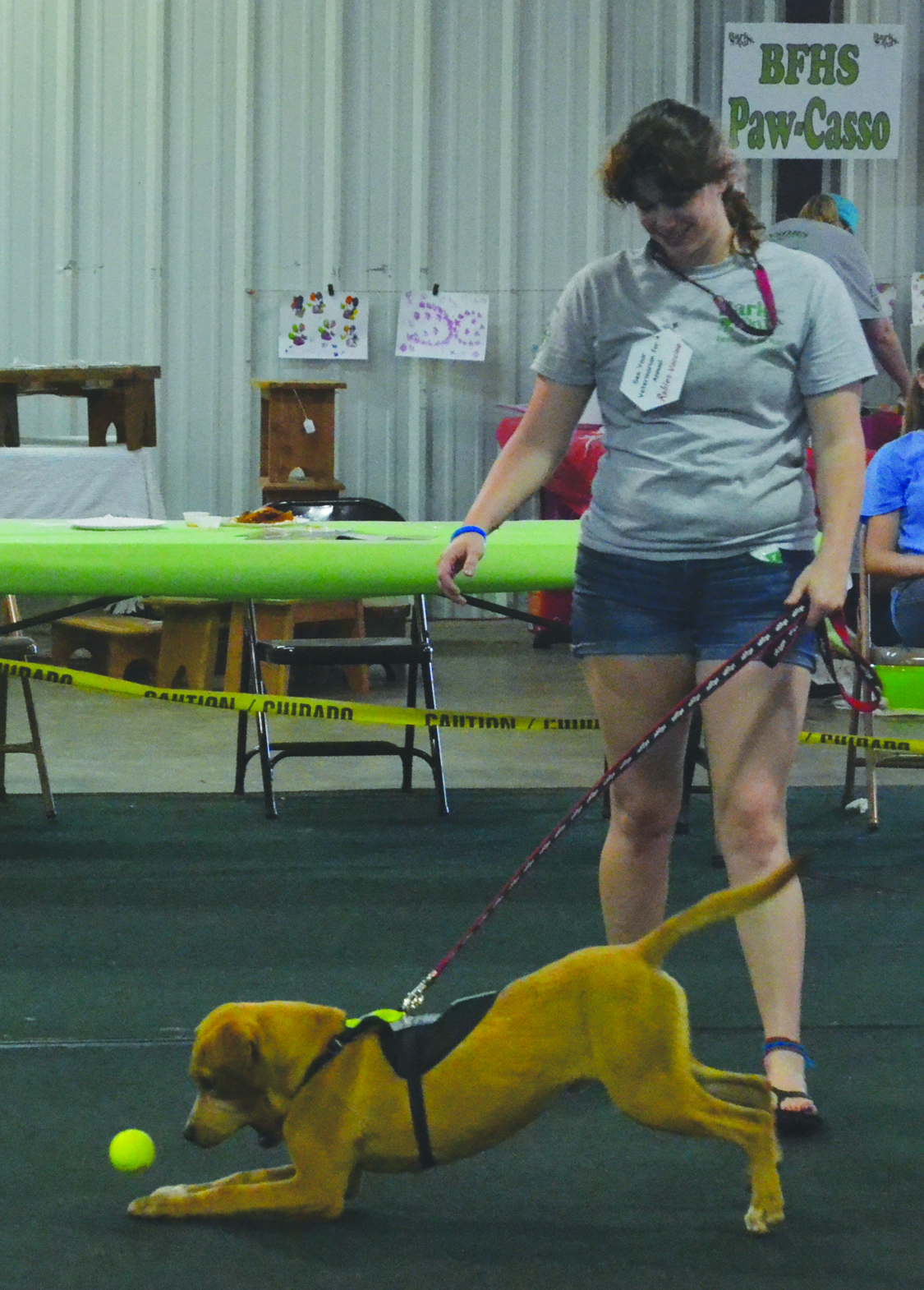 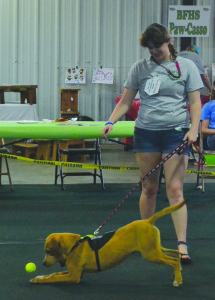 Dozens of pups and their accommodating owners paid a visit to the fifth annual Bark in the Park hosted by the Best Friends Humane Society at the Ag Pavilion on Saturday. With the help of dozens of local and area sponsors and volunteers, the event provided a range of entertaining activities for dogs and humans alike. From the “Paw-Casso” paint booth where dogs could paint pictures for their owners to face painting for kids, everyone was assured a good time.
The event also offered an auction of items provided by event sponsor Budweiser that included NASCAR memorabilia, and a 50-50 raffle that raised nearly $500 for the local shelter. Additionally, Rocky’s Music provided music for the day’s events, and contests were held to show off the pretty pooches including a tallest dog contest won by a massive Great Dane named Freckles who stood 45 inches from head to floor. Other contests included the stay competition where dogs demonstrated tremendous self control while being offered treats. Finally, there was the “Doggy Diva” contest for the prissiest pup in the bunch.
Ultimately, the shelter was able to place three dogs in “Furever” homes on Saturday on top of all of the day’s fun and games.
Around 2009 the BFHS opened its doors to house the lost, injured, neglected and abused dogs and cats of Worth County. BFHS is located on Ephesus Church Road.
Best Friends Humane Society started to fill a need in the county. “They had animal control, but they did not have a humane society,” Said Jody Yarborough whilst discussing the importance of having a place to take care of stray or neglected animals. Yarborough stated that BFHS has two sides to its operation. One is the actual shelter operation with adoptions efforts and health and maintenance of animals. The other side of the operation is the animal protection aspect. In this area, BFHS picks up strays and unwanted animals to bring the dogs and cats in the humane society’s system. Yarborough stated BFHS houses cats because of the need for housing for stray cats even though the society receives no funding for housing cats. Yarborough stated that its possible for the society to have 50 cats come in on one day. Every animal that comes in BFHS receives vaccinations for things such as parvovirus. Once a dog or cat is picked up by BFHS the owner has five days to retrieve the animal from the society. After five days the cat or dog then belongs to BFHS. The humane society averages around 60 dogs. BFHS has about a 70% adoption rate.
Best Friends Humane Society is a low kill shelter. This means that a majority of animals that come in to BFHS are adopted. However, the dogs and cats that aren’t may be overly aggressive toward humans or have medical complications beyond the capability of Best Friends Humane Society. The way these unfortunate animals are laid to rest is by medical sedation. In other words, the death is painless and is similar to falling asleep. Yarborough stated that spring time is the time of year when this becomes an issue because there is only a limited amount of space in the humane society. Although, BFHS has a partnership with PetSense in Tifton in which they adopt around 140 cats each year.
For more information on how you can help, or to give an animal a “fur-ever” home, contact BFHS at 777-7774.