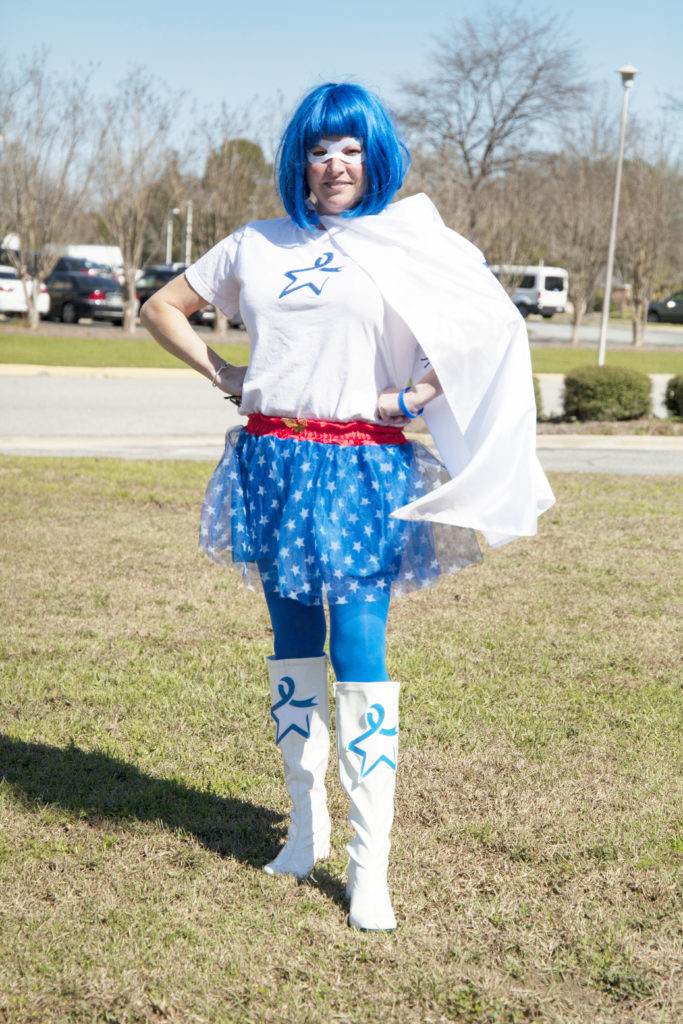 March 6, 2017 | Albany, GA – March is National Colorectal Cancer Awareness Month, and Horizons Community Solutions continues its effort to spread the word about cancer screening, encouraging South Georgians to get tested. Rhonda Green, who manages Horizons’ Community Cancer Screening Program (CCSP), adopts an alter ego in March – Captain Colon – to spread the word that early detection saves lives.
Donning a blue wig, blue tights, white boots, and a cape with the blue star symbolizing colorectal cancer awareness, Green visits local health clinics to encourage people to get screened. “People may not want to think about colon cancer, but when they see me in my super hero costume, they smile and then open up to talking about getting tested,” Green said. The CCSP arranges no-cost cancer screening tests for uninsured patients of participating primary care centers.
Diane Fletcher, chief executive officer of Horizons, said each year, more than 4,000 Georgians are diagnosed with cancers of the colon and rectum (also known as colorectal cancer). She added that while colorectal cancer is the second leading cause of cancer deaths in Georgia and the nation, removal of high risk polyps can prevent most of these cancers from occurring. She added that early detection of a cancer that has already developed can lead to successful treatment.
“Prevention and early detection is highly effective in fighting colorectal cancer, yet too many south Georgians have not taken advantage of screening,” Fletcher stated. She said that screening not only prevents unnecessary suffering and premature deaths due to colorectal cancer, but also saves millions of dollars in healthcare costs by finding cancers early, when they are most curable, and preventing them by having polyps removed.
“Those without health insurance are particularly vulnerable,” Fletcher explained. She said that is why Horizons (formerly the Cancer Coalition of South Georgia) partners with local hospitals, cancer centers and primary care clinics to facilitate screening and follow-up for those who cannot otherwise afford the services.
Green said adults 50 and older (45 and older for African Americans) should be tested. She said doctors may prescribe a take-home stool-based test called the fecal immunochemical test (FIT) that looks for hidden blood in the stool. Others may opt for a colonoscopy performed by specially-trained physicians. “It’s important that people tell their doctors about their personal or family history of colon cancer and polyps, so they can decide together the best test for them and when they should have it,” Green added.
Since 2008, the CCSP has helped thousands of uninsured South Georgians get access to cancer early detection and treatment through its affiliation with local healthcare partners. “But we also want to remind people with health insurance that these lifesaving tests are covered. I encourage them to join me in the fight against colorectal cancer and call their doctors today to schedule screening,” Green said.
For more information about Horizons Community Solutions and its cancer screening program, please contact 229-352-9100 or visit www.horizonscommunity.org.