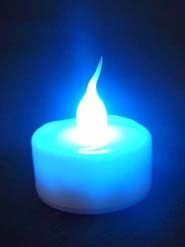 Project Blue Light is a simple gesture. The color blue is symbolic of peace. Concerns of Police Survivors, Inc. (C.O.P.S.) is encouraging law enforcement families, friends, and law enforcement agencies to decorate in blue lights, not just during the holiday season, but every day of the year.

The Project Bluelight began during the holiday season in 1988 when Mrs. Dolly Craig of Philadelphia, PA wrote to C.O.P.S. that she would be putting blue candles in her living room for the holiday season. One was for her son in-law, Daniel Gleason, who had been killed in the line of duty on June 5, 1986 while serving in the Philadelphia Police Department, and the other one was for her daughter and Danny’s wife, Pam, who was killed in an automobile accident in August of 1988. Danny and Pam had six children.

Mrs. Dolly Craig is now deceased as well, but the idea is her legacy. Project Blue Light now burns bright in the hearts of many of the nearly 15,000 surviving families of America’s fallen law enforcement officers during the holiday season and throughout the year.

Especially during the holidays, decorate with blue lights.

C.O.P.S. would like to encourage law enforcement agencies to decorate the precinct stations and headquarters in blue lights. By displaying your blue lights, you will be sending a dual message: that you support America’s peacemakers, and that you hope the coming year will be a year of peace.