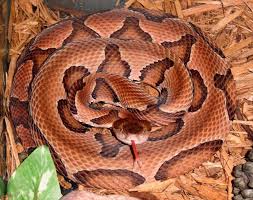 Worth County EMS and Worth County Fire-Rescue were dispatched to the campground at Lake Blackshear in Warwick at approximately 11:00am on May 20 after a 32 year-old man was reportedly bitten on the hand by a venomous copperhead moccasin. As Warwick firefighters were arriving with the ambulance on the en route, Worth County E-911 reported that the victim was alert but his arm was swollen and the swelling was moving up his arm.

EMT’s arrived at approximately 11:16am, and the man was transported to Crisp Regional 20 minutes later for treatment. There was no word as to how the man encountered the deadly snake at the campground or his condition after receiving treatment.

According to information provided by the Georgia Department of Natural Resources, copperheads mostly live in rocky wooded areas or along the edges of swamps and rivers. However, they seem to be “more tolerant of urban development than many snake species. Populations often persist in suburban developments as long as some patches of forest remain.”

Copperhead bites climbed by 137 percent between 2000 and 2013, while bites from unknown venomous snakes more than doubled. Four victims died during that time. Copperheads bite more people than any other U.S. snake species, according to the North Carolina Cooperative Extension at North Carolina State University. But their venom is mild and rarely fatal.

Generally, rattlesnakes are considered the most venomous and the most likely to cause dead, said Schulte. Arizona and California has most of the rattlesnake bites.

According to the University of Georgia, Copperheads range throughout the eastern and central United States but are absent from most of Florida and south-central Georgia. Although copperheads are found in forested areas throughout most of South Carolina and Georgia, their habitat preferences change across our region. In the mountains, copperheads are most common on dry rocky hillsides and sometimes den communally with timber rattlesnakes (Crotalus horridus) on open, south-facing hillsides. In the Coastal Plan copperheads are most abundant in lowland hardwood forest and swamp margins. Copperheads are quite tolerant of habitat alteration and remain common in suburban areas of many large.

Copperheads can be found during the day or night, but forage primarily after dark during the hotter parts of the season. In the Piedmont and Coastal Plain they are frequently observed crossing roads on warm nights.

Because they are common in forested habitats and are well camouflaged, copperheads are responsible for the majority of the snakebites in the Southeast each year. Luckily, copperhead venom is not very potent and deaths from copperhead bites are exceedingly rare. Most snake bites occur when someone tries to kill or harass a snake, so the best way to avoid a bite is to leave any snake you find alone.

Can you spot the snake in this picture? 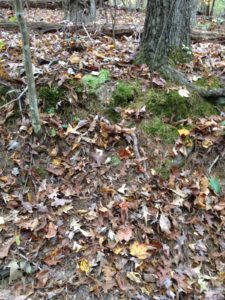