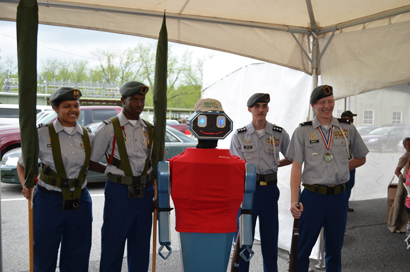 Although the weather forecast was dismal, rain couldn’t dampen the commitment of Mitchell EMC members who attended the 76th Annual Meeting of Members on Friday, April 19.Over 500 members registered before the 2:00 deadline making this one of the most attended meetings in Mitchell EMC history.

The meeting was called to order and a warm welcome was presented by Chairman of the Board Lucius Adkins.Program participants were local youth members.The Presentation of Colors was offered by Worth County High School ROTC.Dallas Knight, Washington Youth Tour delegate, tendered the invocation.Hayes Grogan, Washington Youth Tour delegate, led the Pledge of Allegiance to the flag.A rousing rendition of the National Anthem was delivered by Drew Cavender, Mitchell County Idol winner.Three board members were re-elected including Doyle Medders representing Worth County,  Dennis Champion for Dougherty County and John ‘Bubba’ Johnson, Jr.  in Mitchell County.Tony Tucker, President and CEO, gave a report focusing on customer services offered by the cooperative and summarizing business operations for 2012.The meeting was adjourned as the clouds dispersed and the sun began to shine.It was a great day for Mitchell Electric Membership Corporation and its members.