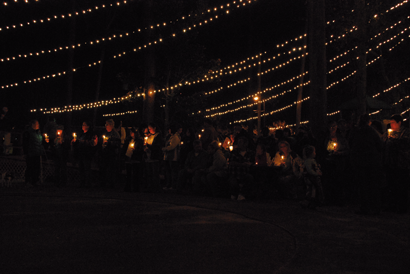 Worth County residents are mourning the loss of 13-year-old Dustin Hammonds. A candlelight vigil held in Jeffords park last Tuesday night saw hundreds of people gather to honor his memory and address concerns that his actions may have been the result of bullying.
After being notified of the tragic event, the Worth County School System immediately brought in extra counselors to the middle school and gave teachers specific instructions that any student who felt the need to talk be released to their care. School Superintendent Dr. Barbara Thomas stated a neighboring county even offered the services of their counselors.
The school system also requested the assistance of the Sylvester Police Department in launching a full investigation to help determine if Dustin had been the victim of bullying. After interviewing 43 witnesses, approximately 32 of those being his fellow students, authorities concluded there was no supporting evidence that Dustin was bullied. According to his closest friends, Dustin never indicated to them he was being bullied nor did they witness any incidents of bullying.
The students interviewed were all accompanied by a parent and when questioned about their knowledge of any acts of bullying, all confirmed they had not witnessed any situations themselves, but were only repeating what they heard. One such student who started a facebook page in Dustin’s honor only met Dustin once, and he, too, had no first-hand knowledge of him being bullied.
When authorities questioned students who said they were “written up” or disciplined for wearing blue to school, all of them admitted it was not true. Some students even posted on their facebook pages they were told not to talk about Dustin while at school. Teachers were told to instruct students to be “careful” with their words and facebook comments and to be “certain” they were not just repeating what others were saying. Unfortunately, many students did just that.
According to O.C.G.A. § 20-2-751.4 (c)(2): Any teacher or other school employee who has reliable information that would lead a reasonable person to suspect that someone is a target of bullying shall immediately report it to the school principal.
The teachers (and students) interviewed included those from the 6th, 7th, and 8th grade, and all, at some point, had daily contact with Dustin. According to them, if there was ever any instance of bullying, they would have reported it immediately.
Worth County Middle School has anti-bullying posters located in the hallways that have been there since the start of the school year. There is also an anonymous tip box available for anyone who has witnessed any act(s) of bullying and according to state law, “any school system which is not in compliance… shall be ineligible to receive state funding”.
Parents are encouraged to remind students of the importance of being responsible  and truthful when posting facebook comments.
The Sylvester Police Department encourages anyone who may have any additional first-hand knowledge to contact them at 776-8500.