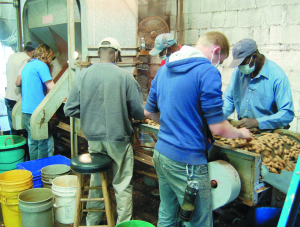 Last Spring, the University of Georgia issued a report on the 2013 pecan crop stating,

“Steady rain fall and pecan scab disease decimated Georgia pecans this past season. Between June and September, the state incurred 30 inches of rain and 60 rainy days according to UGA pecan specialist Lenny Wells. The end result was low pecan yields throughout Georgia.”

Additionally, Wells stated in the article that the increased pressure on the trees from disease and cloudy conditions generally carries over into the following year’s crop as well. The report added that Crisp and Sumter counties, above Highway 280, saw an increase in yields, while Tift and Worth counties struggled to produce.

Then, Louisiana State University released a report in May explaining “scab” and its effect on pecans. According to the report,

“Pecan scab disease is the most economically damaging disease of pecans production in the Southeastern United States.”

The LSU report explains that scab is a fungal disease that affects the leaves, stems, and shucks of the plant. Lesions often form on the pecans from growth of the fungus and the crop can be affected from April until the pecan has stopped growing in July. Black spots are often seen on leaves and the green shucks covering the pecan. And, depending on the severity of the infection, the pecans may not produce at all.

Here in Worth County, the disease certainly seems to be taking its toll on production this year. According to Don and Jane Long, owners of Gibb’s Pecans in Sumner, the influx of pecans has been less than half of what was brought in early last year. According to Don, in the first weeks of the 2013 season, the business was receiving close to 2,000 pounds per day. However, this year, Gibb’s is only getting around 700 pounds per day, early in the season.

The couple says they have seen few desirables so far this year, but the Schleys have been wonderful so far. Stewarts have been mediocre, and the Elliots and seedlings are expected to look good, as they are more scab resistant varieties, but they are just not coming in. As Don Long explains,

“What you get is good, but there just isn’t a whole lot of them.”

Mrs. Jane Long explains that prices are around 70¢ per pound, while the paper shells reach as high as $1.50 per pound. Because the disease stops the nut from developing, she says a good way to tell if your pecans are good is to weigh them before you bring them to sell. A typical five-gallon-bucket will weigh between 20 and 29 pounds. If the bucket weighs 18 pounds or less, the nuts are probably no good.

However, after the cold and windy weather over the weekend and into the first part of the week, the couple expects business to pick up as more pecans begin to drop from the trees.