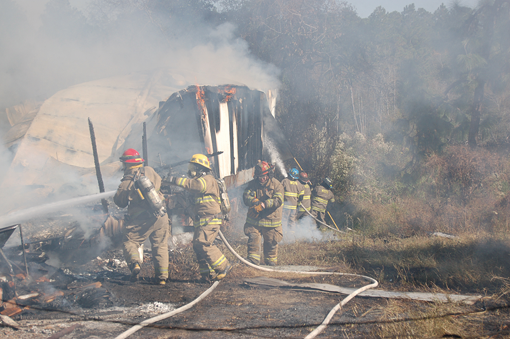 Worth County Fire Rescue responded to 232 Dykes Drive  at approximately 1 p.m. Monday. Upon arrival, crews began immediately working to extinguish a set of mobile homes previously used to house dogs and puppies.
The property belongs to Lewis Hillard, 69, a Sylvester native, who was found to be operating an unlicensed dog breeding business at his home earlier in the year. The Best Friends Humane Society, backed by support of the Worth County Sheriff’s Office and the Department of Agriculture, seized 53 dogs: 24 adults and 29 puppies, from his residence in late May.
The animals had been living in unsanitary conditions and were receiving less than proper treatment. BFHS Director Sherri Hendley referred to the puppy mill as “filthy” and said the dogs were stacked in kennels, being forced to live amongst their own feces and urine. She noted that the water Hillard provided them with was green due to the amount of mold that had collected in their bowls and also said that hoards of rats could be seen running in and out of the animal’s cages. Fifteen puppies and two adults had to be immediately euthanized due to poor health problems.
Hillard was charged with one felony count of aggravated cruelty to animals because he “knowingly or intentionally” caused the death of those animals. He was also charged with one misdemeanor charge of 1st degree cruelty to animals. Hillard was arrested on May 31, 2013 and was released on two bonds totaling $11,500.
The cause of the fire is yet to be determined.