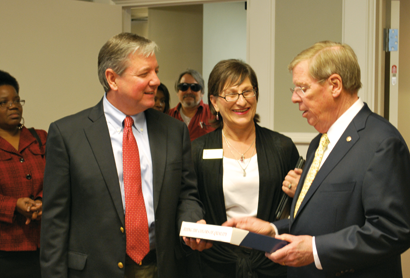 Mayor Bill Yearta was presented an American flag in honor of Sylvester by Senator Johnny Isakson Thursday afternoon at the Chamber of Commerce. The flag had previously been flown over the State Capitol. There was much conversation between the senator and those in attendance at Thursday’s Meet & Greet. When asked if he planned on running again for his current position, Isakson simply answered, “That’s why I’m on the road now.” When asked what he liked most about traveling to Sylvester, he jokingly responded, “Getting a bag of peanuts.”