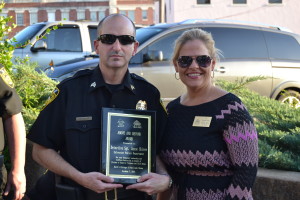 Sgt. Shiver was offered the “Above and Beyond” award by Patticake House Children’s Advocacy Center Manager and Senior Forensic Interviewer, Mrs. Melissa Wood. According to Wood, the recipient of this award never complains when cases of child abuse come pouring in. Instead, they work diligently for each child and displays compassion for all child victims. The advocate stated that she had personally worked on numerous cases in which Shiver was the lead investigator and she knew without a doubt that each case was investigated to the utmost extent with the child always remaining at the forefront.

Wood went on to say,

“[Jason] doesn’t do this for job recognition. Instead, he does it because he has sincere compassion for our child victims.”

“We’ve got to start each day and each case by seeking the Lord. I try to do that. Whenever I get a new case, that’s the first thing I do. I turn to the Lord for his guidance, direction, and wisdom… That’s who I give the praise and the thanks to; it’s nothing I do.”

“The reason why we’re here tonight is because it all starts at home, so I thank my wife and daughter for their support and always being there to understand the extra hours I put in, in time and the stress that I go through during these cases.”

“I’ve seen women come into the court who have been virtually locked in prison for years… If you see them out in the community, it seems like they’ve enjoyed a good life and everything is going fine, but behind those doors… there is a lot going on. A lot of times, these individuals come into court and for the very first time, they have the opportunity to share the horror of their lives. Some of that horror includes being physically and sexually abused. It means not being able to make any decisions about your life, not having a relationship with your family, always being told what to do, what to wear, where to go, what to say.”

The judge also said these victims often feel trapped economically as well because they feel like they cannot afford to escape. Many feel that if they did leave, they would be forced to live in poverty and their children would suffer. So, the women remain in these abusive relationships until ultimately the women feel that there are only two “very drastic options” left. Judge Mims said many of these women become so desperate that they decide to take their own life, or they become a defendant in court after killing someone else. According to the judge, the solution is early intervention so that the victim does not feel trapped.

Finally, the judge quoted Jonathan Huie with the beautiful words,

“Forgive others, not because they deserve forgiveness, but because you deserve peace.”

Judge Larry Mims was equally surprised after Shiver received his award when the shelter presented him with the Honorable J. Harvey Davis Award. According to Divayna Esquivel, Senior Legal Advocate with Chief Superior Court Judge Bill Reinhardt, the award recognizes someone who continues to volunteer their time and expertise to victims of domestic violence.

The organization also presented Mrs. Marsha Harris with the RCPCH Service Award. Harris is the nighttime supervisor in the shelter, and she has worked for ten years to ensure that women and children feel safe and protected when they come to stay in the shelter.

Finally, the candles were lit in remembrance of 69 Georgians who lost their lives from family violence over the past 12 months. For more information on Ruth’s Cottage and the services provided by the shelter, visit www.ruthscottage.com. Or, if you need help with domestic violence, call 1-800-33-HAVEN.