Matthew Daniel, a rural studies-social and community development major from Summerville, was named the recipient of the ABAC Alumni Association Award for bachelor’s degree graduates, and Marlee Mathis, a nursing major from Nashville, received the George P. Donaldson award for associate degree graduates.

ABAC Alumni Director Lynda Fisher said the Donaldson Award has been a part of the commencement ceremony for many years, and the Alumni Association decided to add the additional award for bachelor’s degree graduates in the fall 2014 ceremony.

Keri Jones, a 1999 ABAC graduate, was the commencement speaker.  Jones told the graduates to “pursue growth and learning throughout your life.  Capitalize on making your strengths stronger.  Learn them and grow them.

Daniel has been an active member of a variety of campus organizations throughout his ABAC career.  He served as a senator with the Student Government Association from 2010-2011, was a participating member of the Rural Studies Club from 2013-2015, and played both intramural football and softball.  He has also been a member of the Baptist Collegiate Ministries, serving as an officer since 2012, and ABAC’s collegiate 4-H, serving as president from 2011-2012.

The son of David and Nancy Daniel, he has immersed himself in the community, volunteering with the Tift County Extension, Lifehouse Ministries, Ruth’s Cottage and the Patticake House, the Tift County Council of Child Abuse and the Tift County Commission on Children and Youth.  He is a member of Northside Baptist Church.

“During my time at ABAC I have experienced my share of personal trials and triumphs,” Daniel said. “I held onto the feeling that ABAC is where I needed to be.  Through all of the hardships that I have faced during my journey at ABAC this has been the place that has supported me and played a part in molding me into the man I am today.  There is truly no place like ABAC.”

Daniel will begin a year-long internship with Northside Baptist Church in Tifton in preparation for his enrollment at a seminary in the near future, a goal that Daniel sees as attainable because of the support ABAC has given him.

Mathis has held positions in the Georgia Association of Nursing Students (GANS), serving as both the historian and president.  She served as the Student Government Association representative for the School of Nursing.  But nursing wasn’t her first career choice.

“I was in sixth grade, and I was still adamant that I wanted to be an astronaut,” Mathis said.  “It wasn’t until I came to ABAC and took a First Aid and CPR class that I finally realized nursing was the job for me.”

Mathis has been very active in the community through her studies. As a representative of ABAC and its Nursing Program, Mathis attended Cook High School’s Career Day, volunteered with the annual Run for the Nurses, the Alzheimer’s Benefit Ball, the Georgia Cancer Coalition Organization’s “Play Day for Hope,” and Carry The Load. She also helped plan events for charitable causes including diabetes awareness and prevention of domestic violence.

The daughter of Greg and Tammy Mathis, she was crowned as Ms. ABAC 2015, a role she embraced as a representative for the college.  As Ms. ABAC, Mathis visited Carl Vinson VA Medical Center in Dublin to show ABAC’s support for America’s Heroes and was a guest speaker at the Tift County Rotary Club meeting.

Mathis was recognized as an ABAC honors student during the 2014 and 2015 Honors Day events.  She was also named to the fall 2012 President’s List and the spring 2013 Dean’s List.

“My journey through the nursing program has been difficult,” Mathis said.  “I have faced every obstacle imaginable that I never believed I could overcome.  Through this experience, I have come to believe that God handpicks our nurses. Until someone has sat down and prayed with a patient and their family or held the hand of a dying man until his very last breath, no one will ever be able to understand that being a nurse is not just a job; it is a way of life.”

Mathis plans to further her education and obtain a bachelor’s and a master’s degree in nursing. She has always been fascinated with emergency trauma patients and the operating room, so she wants to earn the certification and credentials to become a surgical nurse practitioner and work at a Level 1 Trauma Center. 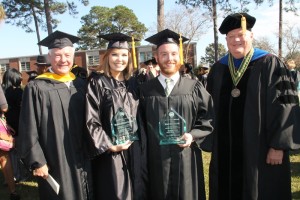