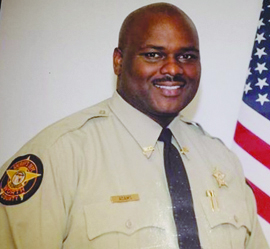 After 24 years of service to his community, a Worth County deputy is asking for help in his battle against cancer. Deputy Tommy Adams was suffered a shoulder injury while on duty in 2013 while he was struggling with a suspect. Two weeks after undergoing surgery, Adams says he suffered two pulmonary embolisms in his lungs which caused an infarction. Simply put, a blood clot blocked arteries in his lungs preventing blood flow, and thus causing a portion of the lung to die.

To make matters worse, while Deputy Adams was recovering, doctors found cancer in his spleen. According to Adams, insurance will cover the work related injury but none of the medical expenses related to cancer treatment.

The deputy says he has never smoked nor drank, or had any unhealthy habits. Rather, he was injured doing what he loves: protecting and serving his community. Now his wife, Sheila, has been forced to resign from work to help care for her husband. The couple has four children, one of which is still in high school.

“I am reaching out to my friends, family, and community for any donation, no matter how big or small… My family and I want to thank you in advance for any assistance you may give, and may God continue to bless you all,” Adams stated on a gofundme.com account created by his wife to raise funds.

Adams underwent his third surgery in 11 months on November 6. Updates on this page indicate he is feeling better as he recovers from the surgery, but the family knows there is still a long road ahead. In the first five days of the gofundme campaign, the family has raised over $1,000. To donate, visit www.gofundme.com/gq1cl4. An account has also been set up at SunTrust Bank in Sylvester.