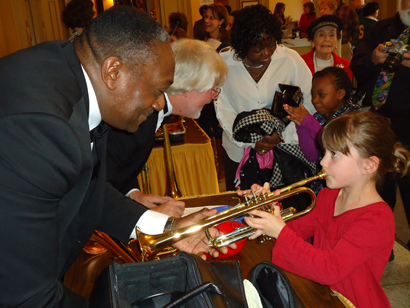 Musicians assist patrons with instruments at the 2103 Instrument Petting Zoo.

ALBANY — The Albany Symphony Orchestra presents a fun-filled interactive family concert, The Orchestra SINGS, on March 14 in the Albany Municipal Auditorium. A complimentary Instrument Petting Zoo for all ages will be available in the lobby at 6:30 p.m. Patrons may play the instrument they’ve always wanted to. Instruction will be provided by music teachers and orchestra members. The concert begins at 7:30 p.m.

This educational opportunity teaches the function of melody, a universal element of music, and will feature Beethoven’s Ode to Joy, Copland’s “Simple Gifts” from Appalachian Spring and other exciting musical examples. The performance explores music — specifically the melodic element  — through lively narration, projections and extended examples performed by the ASO. Composers and musicians create melodies, which can be sung or played on instruments. The orchestra sings when its musicians play melodies on their instruments.

“The Albany Symphony invites anyone of any age who loves music and would like to learn more about how music is put together. The Orchestra SINGS is about melody and function in music.  The interactive program is appropriate for elementary students up through seasoned concert-goers,” commented Dr. Claire Fox Hillard, ASO music director and conductor.

The evening’s performance follows Carnegie Hall’s Weill Music Institute Link Up concert for third through fifth graders in Dougherty and Lee County’s school systems that morning. The ASO has been a national partner in Link Up for the past six years. The curriculum consists of repertoire, hands-on activities and a culminating interactive performance with the live professional symphony orchestra. The Family Concert is designed as an expanded version of the Link Up curriculum.

The WMI creates broad-reaching music education and community programs that play a central role in Carnegie Hall’s commitment to making great music accessible to as wide an audience as possible. Woven into the fabric of the famed Carnegie Hall concert season, these programs occur at Carnegie Hall as well as in schools and throughout neighborhoods, providing musical opportunities for everyone, from pre-schoolers to adults, new listeners to emerging professionals.

In its 50th anniversary season, the ASO is a fully professional per service orchestra serving the southwest Georgia region with classical, pops, educational and special concerts. Recognized for its innovative audience developmental efforts and diverse programming, the orchestra has received the League of America Orchestras and American Society of Composers, Authors and Producers (ASCAP) awards on multiple occasions.

Concert tickets are $5 and $10 depending on seat location. Tickets may be purchased online at albanysymphony.org, by calling 229-430-8933 or at the Box Office one hour prior to the concert.