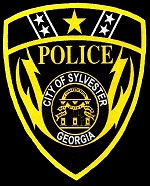 On December 23, 2014 Ptl. Cox of the Sylvester Police Department was dispatched to 1102 East Franklin Street Sylvester, Georgia (WalMart) in reference to shoplifting. Upon arrival the responding officer was informed by store employees that one black male and two black females exited the store with a shopping cart full of merchandise that was not paid for.  The store employees notified the responding officer that the three subjects left the scene in a silver in color Chrysler Pacifica prior to the officer’s arrival. Video Surveillance was provided to the responding officer of the three suspects and their vehicle.  The video surveillance was forwarded to local media outlets asking for assistance in identifying the trio of shoplifter’s.

On Friday, 01/02/2015 felony shoplifting arrest warrants were issued for the following suspects:

On Monday, 01/12/2015 Lamond Marcus Seadrow and Daphne Clark Seadrow were arrested on the felony shoplifting warrants.

The felony warrant for Trominki Cauley is still active pending her arrest.  Anyone with knowledge of her location is encouraged to call Crime Stoppers at 436-TIPS(8477) or the Sylvester Police Department at 776-8500. You may remain anonymous.

The Sylvester Police Department would like to thank those that assisted in the identification of these suspects.