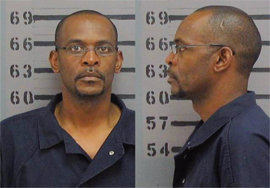 Former Worth County Commissioner Tony Hall was recently arrested in Dougherty County and charged with  two felony counts of theft by conversion.
The Sylvester native served as the District 1 commissioner on the Worth County Board of Commissioners from 2008 until he was defeated in last year’s election to current District 1 representative Joe Gaines. Hall also served as Vice President and Albany Area Manager of the Southwest Georgia Food Bank, Second Harvest, from 2007-2011.
The charges stem from allegations related to his position at the Food Bank.
According to Georgia law, Theft by Conversion occurs when a person lawfully obtains funds or other property and then converts those funds or property to his own use. The charge becomes a felony when the item(s) exceeds a value of $500.
Hall’s case is scheduled to appear before the grand jury in Dougherty County on June 26, 2013. If convicted, Hall could face up to 10 years in prison.