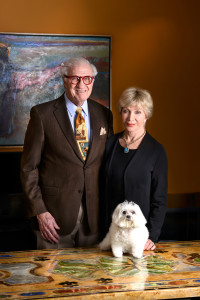 March 24, 2015 (Atlanta, Ga.) – Francis Lott, a native and life-long resident of Douglas (Coffee County), Georgia, has made a significant gift to the Georgia Tech Foundation, funding the Francis and Diane Lott Scholarship Endowment as part of the Wayne Clough Georgia Tech Promise program. The Tech Promise program was established to help provide a debt-free Georgia Tech education for dependents whose primary obstacle to success is the lack of financial resources. To qualify, total family income must be less than $33,300 per year.
First preference will be given to undergraduate applicants who are residents of Coffee County and, secondly, to students from the 62 other counties which comprise “South Georgia.” An additional preference shall be given to those students from other counties who pursue a degree in architecture.
Francis Lott is a graduate of Georgia Tech (architecture 1959) and is founder/CEO of Lott Properties, a successful real-estate development firm, headquartered in Douglas.
Wayne Clough, also a native of Douglas, served for nearly 14 years as one of the most esteemed presidents of Georgia Tech (1994-2008) and was the first graduate of the Institute to also become its president.
The Lotts wish to raise the visibility of Georgia Tech among high-performing high school students across South Georgia, noting the relatively small number who apply and attend. Hopefully, their endowment will increase interest in Georgia Tech among high school students in Coffee County and the rest of South Georgia, leading to increased application rates from that area.
Since 2007, when the program began, 383 Tech Promise scholars from 89 Georgia counties have earned Bachelor of Science degrees at Georgia Tech, with 32 going on to earn Master’s degrees.
For more than 16 years, Georgia Tech has been ranked among the top 10 public universities in the United States and, for the 2nd year in a row, the #1 best tuition investment in the US by Smart Money magazine. GT offers top-rated academics with a focus on STEM and cutting-edge technological research. Median starting salary is $61,000 per year for GT graduates with a bachelor’s degree.
Details and requirements of the GT Promise Scholarship Program are available online at http://www.finaid.gatech.edu/promise, e-mail at finaid@gatech.edu, or phone (404) 894-4160.