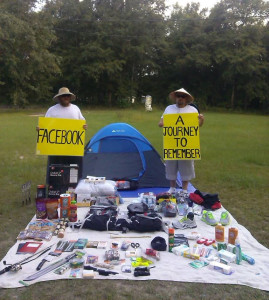 On August 22, 2014, brothers Ricky and Clayton Harrington, of Worth County began a journey that will be one for the record books. Starting in Newport, Florida, they plan to walk around the boarder of the United States. Ricky, a mechanic says that what started out as a mission to improve personal health for himself and brother Clayton, a construction contractor, has turned into much more. While inspiring other family members to take control of personal health, they are also walking to raise awareness for Cystic Fibrosis, a life-threatening genetic disease that primarily affects the lungs and digestive system (according to the CFF website). Their sponsor, Mike Wood, owner of P.L.R. in Albany, has a daughter, Kyndall, 10, who was diagnosed with CF. The adventurous brothers hope to raise money during their trip and donate a percentage back to the Cystic Fibrosis Foundation.

Ricky and Clayton will walk 30 to 50 miles per day (10-12 hours) during their journey, covering 33 states and approximately 15,000 miles total. The catch: no rides, no fast food and no hotels. “We’re going to be camping, hunting and fishing the whole way,” says Ricky. They believe the walk will take nearly a year to complete. The two submitted applications for sponsorship and hope to acquire more support along the way. They also alerted The Guinness Book of World Records and upon completion of their trek around the US, will set a new record.

The brothers share one phone to keep supporters updated on their progress and plan to post nightly updates and weekly videos. To keep track of their journey or to donate, log onto Facebook and search for “A Journey To Remember” or go tohttp://www.facebook.com/WalkForCFF