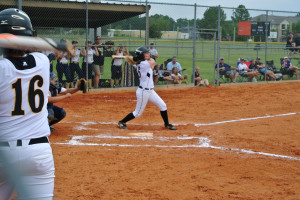 With Freshman Caroline Newton on the mound for the Rams, TCC quickly showed they meant business with a pair of solo homeruns in the first inning. Though the Worth girls were down by two early in the game, they seemed unaffected and ready to battle back. In the bottom of the inning, freshman Taylor Layfield fired a shot over the left field fence to prove that Worth County was equally capable of going yard against a strong arm. At the end of the first inning, the Rams trailed, 2-1.

All was quiet for the next two innings until sophomore McKenzie Newell drove a double to the center field fence allowing Layfield to cross the plate for the tying run. The Lady Rams seemed to be gaining momentum as the inning ended and Head Coach Kaleb Hathcock exclaimed to his players, “We’re back at zero-zero!” The TCC pitcher was showing signs of fatigue, and the Worth girls seemed to be chipping away at the Yellow Jackets defense.

Unfortunately, the game would slip away for the Worth team as TCC scored four additional unanswered runs with no response from the Lady Rams. Ultimately, the game ended, 6-2, in favor of the Lady Jackets and Worth County was dealt the first loss of the season.

However, the girls rebounded with a huge boost of confidence over the weekend as they travelled to Baconton to participate in the Blazer Blast softball tournament. On Friday, the Worth girls took down the Howard Lady Huskies from Macon by a score of 12-2 before defeating the Echols County Lady Wildcats, 3-1. Then on Saturday, the Worth team racked up another pair of wins by blowing out Clinch County, 10-2, and Charlton County, 11-4. Overall, the Lady Rams now stand with a 9-1 overall record on the 2014 season, though they are now 0-1 in region play.

This week, region play continues for the girls as they travel down to Bainbridge on Tuesday to take on their other new 1-AAAA competitors, the Lady Bearcats. On Thursday, the girls will return home to the Diamond Den in Sylvester to take on the Albany Lady Indians.