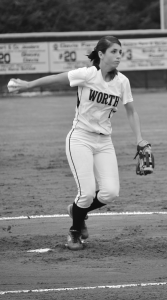 The Worth County softball team celebrated the high school career of Worth’s only senior, Courtney Hamilton, in the final home game of the season last Tuesday. Hamilton pitched a shutout in the game against Monroe and struck out five batters. At the plate, the senior Lady Ram hammered a pair of doubles, crossed the plate twice, and earned an RBI. Hamilton also stole a base during the game.

The Worth County Lady Rams played their final home game of the 2014 season last Tuesday hosting the Lady Tornadoes from Monroe High. The game started with the first pitch to Worth’s leadoff hitter, Taylor Layfield being hit. After shaking off the beam and reaching first, the Monroe pitcher lobbed her second pitch across the plate for McKenzie Newell to fire back to the left field fence for a run scoring double. Lindsey Toneygay would also drive in a run on a fielder’s choice to end the inning with a 2-0 advantage for the Worth girls.

The Lady Rams drove in another pair of runs in the second, and then opened up in the third with six more runs to put the game to rest. Caroline Newton hit a solo homer to lead off the onslaught of runs. This would mark the freshman slugger’s seventh home run of the season. Courtney Hamilton and Toneygay also drove in RBIs to run up the score in the short game.

Tuesday was senior night for the Lady Rams to celebrate the high school career of the team’s only senior, Courtney Hamilton. In addition to her RBI, Hamilton also pitched for the Worth team to secure the victory. The senior softball player struck out five batters, walked one, and allowed three hits in the shut out effort.

“She comes to practice every day, ready to work and she never complains. She’s always looking on the bright side, very optimistic. She’s been a very good leader this year for the ball club.”

Hathcock says a lot of Hamilton’s younger teammates have bonded with the senior throughout the season. The underclassmen look up to her and ask her for advice concerning big games or tournaments where Hamilton has experience.

On Saturday, in the final contests of the regular season, Worth travelled to Ashburn to take on the Turner Lady Rebels in a double header. In the first game, the Lady Rams blanked Turner, 15-0. Then in the second game, the Worth girls ended the game early again, 12-1.

Since the loss to Lee County on September 23, the Lady Rams have finished the regular season by shutting out each of their last four opponents. In fact, the Worth team has scored a total of 67 runs in the last five games while only allowing a single run to score in the second game against Turner County Saturday.

If the girls win against the Lady Maids, they will move on to take on the winner of Bainbridge and Monroe. While the Worth team lost to Bainbridge, 0-3, early in the season, the region has really shaken up closing in on this week’s tournament. Worth beat Crisp, but Crisp beat Bainbridge and Thomas County Central. So, any team could potentially bring the trophy home next week. As Hathcock explains,

“My girls really want to see TCC and Bainbridge again. They’re really looking forward to that. We all feel like we really let the TCC game slip away. We should have beaten them. Then with Bainbridge, we just didn’t show up, so I’m confident we can beat them too.”

In the first game against Cairo on September 9, the Lady Rams won by a narrow final score of 3-1. If the girls beat Cairo in the first game, they will take on the winner of Monroe and Bainbridge at 7:30 on Tuesday.

← Four Ways to Fight the Fear of Failure
Raiding Your 401(k) Piggy Bank? Here’s What It Could Cost You →