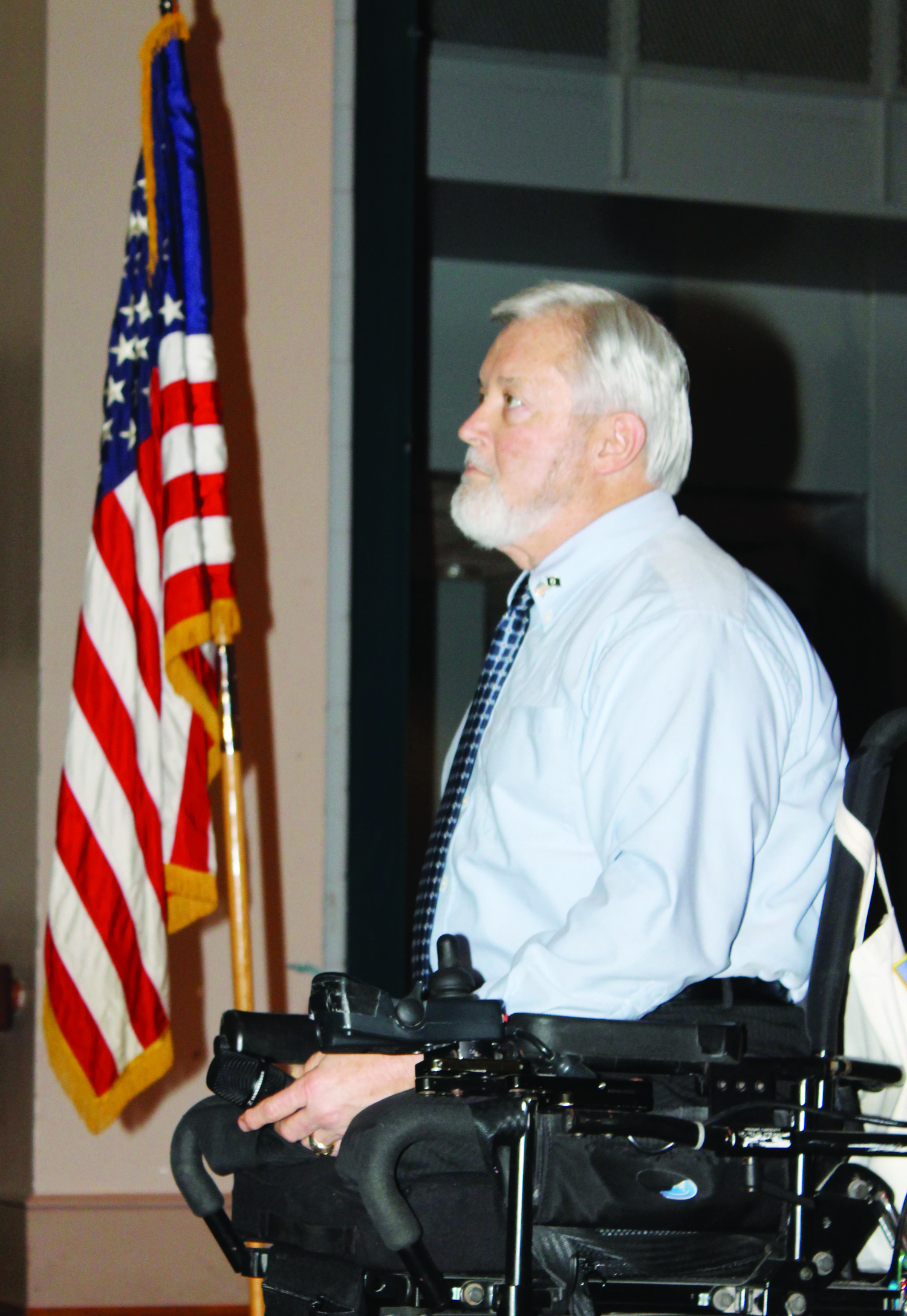 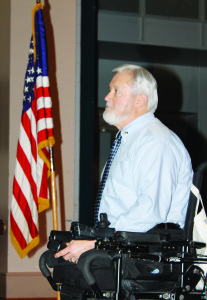 With his right shoulder and arm completely gone and legs missing well above the knee, Tommy Clack said he has much to be thankful for.

Vietnam War veteran Capt. Tommy Clack came back to Turner County last week to serve as the keynote speaker at the Chamber of Commerce banquet. His speech centered on what he is grateful for and the four words: God, self, family and community.

“They are how I govern my life,” he said. He suggested everyone in the crowd also use the words as a life guide. The order is less important than the words, he said.

Vietnam taught him many things, he said. The most important lesson is:?We all bleed red.

The idea that we are all in this together and we have to work together tied the four words together in his speech.

“Think about what else you can do for this community,” he said.

“I?am a big believer, My faith in God lets me get up in the morning. He has allowed me to experience those (life) to make me a better person,” he said. “There are no bad days in life. Without Him, I do not have a life.”

His experiences in the war and that country made him a better person, he said.

Some people complain about pain. Tommy Clack knows pain. Nearly blown apart in Vietnam, he spent nearly 2 years in the hospital undergoing surgery after surgery. He deals with pain daily, but does not rely on pain medications.

“Pain lets you know you are alive,” he said. “God’s message to me was:?Clack, get your butt out of bed. There’s nothing wrong with you.

“God has really blessed me.”

He did discuss his current condition, something he’s lived with for more than 40 years. He’s previously shown he has a sense of humor about it. He loves to tell people he’s saved plenty of money on socks and shoes over the years. That’s just his attitude.

“I?look different, but there is nothing wrong with  me…. If you look at me and see the negative side, you need to change your attitude,” he said. “I realized if I don’t stick out my hand and say, ‘Hi, I’m Tommy Clack,’ the world would pass me by.”

He drives, hunts, fishes and even swims. He credits swimming with keeping him alive and fit. He also plans to live to 100.

“If you don’t believe in yourself, no one else will,” he said.

That’s a message he takes to VA hospitals even today.

“If we believe in ourselves, nobody can put us down,” he said. “If they can’t come up to out high level of standards, we don’t need to deal with them.”

“Family is the most important aspect you will have going through life.”

Clack raised three children on his own.

He also credits his father and mother for helping turn him into the man he is today. Dad was in charge of the whippings.

“Those discussions helped me to get where I am today,” he said.

His mother handled the love.

“Between the two of them, I hope I turned out to be a good human being,” he said.

His family was there when he came back from ‘Nam. He recalled being in the hospital when deer season opened. At the time, he could not sit up. Despite that his father and an uncle took him out of the hospital and to the deer woods where he was surrounded by other family members.

“The first time we turn out back on family, we’re going downhill,” he said.

Family is more than just the people who are blood kin. He still gets calls late in the night from veterans who need someone to talk to.?“That man or woman is part of my family.”

During back to his days in the VA medical system, he shared the hospital with 350 other ‘Nam veterans. Only one committed suicide and that soldier’s parents constantly put him down. It was so bad, some of the family were actually banned from the ward.

The lesson there is “treat everybody with respect.”

The United States is unique among the world’s nations in the way we respond to disasters, he said. When calamity occurs anywhere in the world, people here give.

That’s both good and bad, he said.

“We as a community respond only when there is a disaster,” he said. A community should be responding regularly to keep the good things going as well, he said.

“Community makes a big difference in how things get done,” he said. “It isn’t money out of the federal government that makes change. It is right here.”

Volunteers are what drive change. More people need to volunteer, he said. He then made a joke about people on the Chamber board dying. Instead of going to Heaven, they were assigned to Hell to experience some discomfort first. A few weeks later Satan called St. Peter and asked if he’d take the Turner County people back. Lucifer was afraid if the people stayed much longer, they’d have Hell airconditioned.

“There are lot of little hells out there that need to be air conditioned. Get involved,” he said. “There are those out there who need us to help  them. They become one of us and they help others.

Since the founding of the nation, US?troops have been sent to “hot spots” in 280 places around the world. Mr. Clack said the US is not and should not be the policeman of the world, but that attitude of sending in help is what sets the US apart.

“When things turn bad, we’re the first ones on the scene,” he said.

He pointed to Hurricane Katrina and the national outpouring of support in the wake of that. In his speech, he said no countries showed up to help. That’s not true. Countries around the world, including some of the poorest, sent money and aid workers. One of the first countries to offer help was Cuba, but the state department rejected that offer. The state department also rejected some other offers.

The US also has plenty of people who complain about the government.

“They tell me they didn’t vote. I tell them to shut their mouths and quit complaining,” he said. Earlier in his speech Mr. Clack said he is definitely not politically correct.

He encouraged people to vote. That’s the only way we will keep the nation’s core principles.

“We are a God-fearing nation. We are founded on?Christian principles,” he said.

He admitted he does have enemies.

“I am willing to go off and die to give them the right to disagree with me. They would rather I go off and die so they don’t have to listen to me,” he said. “Faith in God and country are worth dying for.

At the same time, he said the US?also has enemies. Because of that, we must be prepared for war at all times.

“There are people out there who want to see us go under,” he said

He ended his speech with a quote from English reformer John Ruskin (1819-1900):?“The highest reward for man’s toil is not what he gets for it, but what he becomes by it.”

Mr. Clack was in town in the fall as the key speaker for The Traveling Wall exhibit. He touched on that in his speech to the chamber members.

“It was a big healing process,” he said.