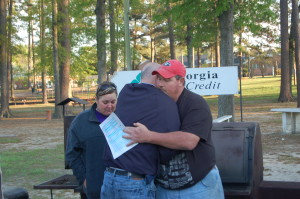 Last Friday afternoon, Pastor Mark Willis of World Harvest Revival Church held a fundraiser to support former Worth County Fire-Rescue Battalion Chief John Graddy and his family after Graddy lost his job at Worth County Fire Department. Willis and his crew cooked Boston Butts for two consecutive days to sell and raise money for Graddy. The local pastor stated, “After hearing what was going on with John, the Lord laid on my heart that I had to something. At first, it was just being a spokesman. Then, ‘Meat the need’ just began to be born.” Willis stated that everyone who helped at the event was a blessing, and he went on to say that he plans on helping others by utilizing similar “Meat the Need” fund raisers.
Willis and his crew sold 184 Boston Butts. Each butt cost $20 and they raised $3,680. The cost of buying all the meat to cook cost Willis $1,608. A concerned citizen donated $800 to the cause. Graddy and his family received a total of $2,675 not including the donations received of $1,020.
Willis stated just before handing Graddy the funds, “You don’t give people a hand out. You give them a hand up.”
Graddy stated, “I’ve never been one to ask for help, but the need was there and you guys met the need. It humbles me that people come together and recognize the need.”
Willis ended the presentation with a word of prayer.