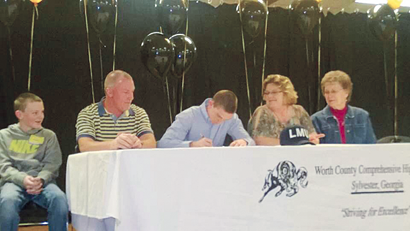 Last Thursday afternoon one of Worth County’s athletes signed a scholarship to Lincoln Memorial University. Dale Pate signed a scholarship that would be great for any athlete, but this one was extra special. This one was the largest scholarship the university has ever offered. Dale says he chose the school, “because they offered the best benefits and the best campus. I had a lot of offers, but this was the best for me.”
Along with the largest scholarship, Dale was the school’s number one recruit for track and cross country. He plans to graduate in four to five years and wants to work as a physical therapist. Along with the amazing campus and great athletics Dale will be participating in, he will also have the opportunity to be on the sidelines as an intern at sports competitions for three major universities, Tennessee, Vanderbilt, and Kentucky. Dale will run cross country and track at Lincoln Memorial.
Dale plays soccer, runs track, and cross country. When he started running, he says, “I hated it. But my mom wouldn’t let me quit. She said I had to run one more race. I won that next race and figured if I was winning it was a little more fun so I stuck with it.” Dale’s personal record for cross country was 3.1 miles and he completed it in 16 minutes and 6 seconds. That is a regulation course for high school.
Dale wants to give special thanks to his family, friends, and Coach Colby Simpson. “Coach Simpson pushed me in both sports and my family and friends were always supportive.”