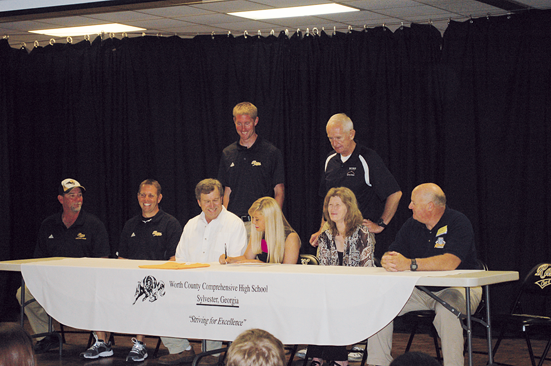 Worth County High School senior Brittany Pittman signed Worth’s first soccer scholarship last week to play with Andrews College this fall. As the signing began last Thursday morning, Worth Athletic Director Russ Beard stated,
“This is a tremendous day for the Pittmans, and Andrew College is getting a great athlete. She is a two sport athlete for us, and hopefully she’ll get down there and have a great season… This is a great day for Worth County, and greater day because we have an athlete heading off to get a college education. That’s what it’s all about. We’re proud of Brittany and her family.”
Former soccer coach Mitch Mitchell, who coached Pittman in her first three years, also commented,
“Andrew College is getting a great person in Brittany. Not only is she a great athlete, but she is also a great student, and that is something our soccer program strives for in Worth County. And, I know she’s going to make us proud.”
The Worth Defender, playing central back, plans to study pre-nursing at the two year institution in Cuthbert, Georgia. While she has played a major role on the soccer field as well as the softball diamond for the Lady Rams in her high school career, Brittany says soccer is her passion and she hopes to set an example for generations of Worth soccer players to come.
Though he only coached her for her senior season, Worth’s Head Soccer Coach Colby Simpson said Pittman has served as “the backbone of the defense.” According to the Worth Coach,
“She was our speed. She was our most experienced player, and for her to have this opportunity, she is opening the door for everyone in Worth County to realize that they can go play soccer.”
Meanwhile, Brittany says she is just thankful to be given the opportunity to continue playing soccer while she furthers her education. Pittman says she is proud to play for such a distinguished school, but she also understands that this opportunity may open the door for future Worth soccer players. As the first Worth player to earn a soccer scholarship, the senior also hopes that her accomplishment will inspire future student athletes to work harder academically and pursue all available opportunities.