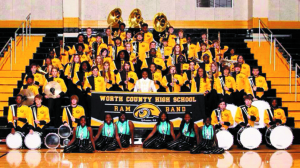 The Worth County High School Ram Band will participate in the Chick-Fil-A Peach Bowl’s half time show on New Year’s Eve with thousands of students from schools all over the country. The band departed on Sunday afternoon for an exciting three day trip to Atlanta that will culminate on Wednesday afternoon when the band takes the field in the Georgia Dome to perform at half time in the Chick-Fil-A Peach Bowl between Texas Christian University and Ole Miss. The WCHS band will be among schools from as far away as Detroit to participate in a range of activities including competitions, a parade, and the half time show.

According to WCHS Band Director Miki Hutchinson, the events began Monday morning when the Jazz and Concert bands participated in a competition. The band will then attend an awards banquet and dance on Tuesday night before leaving at 6:00 a.m. on Wednesday to make their way to the parade. And, as the students prepare for their half time performance, they will also have the opportunity to watch TCU and Ole Miss’s band practice.

The band has been practicing regularly to keep their chops up as they had to learn two new songs for the performance. Approximately 1,000 students from all over the country will be on the field at the same time for the show. The Worth students will rehearse with their counterparts on Tuesday, and all of the Worth players will be separated by instrument for the performance.

Kickoff is set for 1:00 Wednesday afternoon, and Hutchinson encourages everyone to watch the pregame and game for a glimpse of our students. The game between the #6 and #9 teams promises to be among the most exciting contests this bowl season. A youtube link will be available after the game to watch the half time performance. The Sylvester Local News will provide that link when it becomes available.