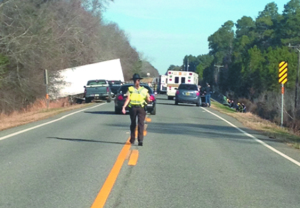 Just before 10:00 on Saturday morning, Worth County rescue units were called to Highway 33 in Warwick just before the intersection of Highway 32 in response to a wreck involving a passenger vehicle and a tractor-trailer. Apparently a Ford pickup truck, driven by a Terrell County man, was travelling north along 33 when he crossed over the center line and struck the semi.

Following the crash, Georgia State Patrol called a Haz-Mat team and the DOT in to redirect traffic and clean up diesel fuel that spilled from the semi. The south bound lane of Highway 33 was closed for most of the day as crews worked to clean up the spill.

UPDATE: As of Monday, it has been confirmed that the operator of the pickup truck, Mr. Anthony Dale Landrum has passed away due to the injuries received in the accident.