The Sylvester-Worth County Recreation Department nine and ten-year-old Rams brought home a championship trophy from the 53rd Annual Turkey Bowl in Tift County last week. The week-long event that lasted from November 17th through the 24th hosted over 70 rec league teams from all over South Georgia. Worth County fielded three teams to compete including eight and nine-year-olds and 11 and 12-year-olds in addition to the championship team.

According to local Recreation Department Director David Cooper, the age divisions were split into three brackets each. So, while 12 teams played from the 10U class they were separated into four team brackets. The single elimination tournament began on Saturday, November 14, and the championship game was played on Tuesday, November 24.

The Rec Rams were essentially an All-Star team selected by the coaches at the end of the regular season. The coach of the winning team from the season’s league play serves as head coach for the Turkey Bowl team, though other coaches join in to prepare the young Rams for the post season tournament. Scott Mullen served as head coach for the championship team this year. Cooper says, “I’m proud of the kids, and I’m thankful for the coaches and the parents. They start practicing at the end of August, and they go three days a week. So, they’re giving up a lot of their time.” Then, the coaches and players devote three-and-a-half weeks to the Turkey Bowl at the season’s end.

Additionally, this year’s group of young standouts were allowed to practice on the varsity football field. The coaches and parents treated the kids to a couple of meals, and they took team pictures just like the varsity Rams would. Cooper says this gives the kids a taste of what it will be like in the future and strengthens the bonds that transforms a team into a family.

For their efforts, a day has been designated for the team to wear their jerseys to school. They will also participate in the upcoming Christmas parade, and banner featuring the team’s picture will hang on the fence of the Murt Melton complex during next football season. The director says this may be the first time a Worth team has won since 2003.

Cooper also says that Worth County Athletic Director Frankie Carroll, Head Coach Jason Tone, and WCHS Principal Scott Chafin has expressed interest in doing more with the recreation teams in the years to come. For example, a jamboree where all of the teams play could be held a Milt Miller Field to kick off the season. 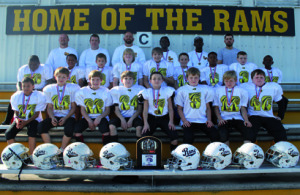