“Fire Coach Richt!” The rabble-rousers have reached a blood thirsty pitch with every game that the Georgia Bulldogs have lost for several years now. “The play calling is too predictable,” or “He doesn’t win the big games” has been the rumbling chants from within the Bulldog Nation for many seasons.

It’s been a tough year to be a Bulldog. It’s hard to know that you have the greatest talent to ever grace a college football field, but you never get the glory. It’s tough to watch all of your biggest rivals including Auburn, Alabama, Florida, and Florida State hoist national championship trophies while the Bulldogs sit at home, scratching their heads, and wondering what happened.

We reminisce about a great battle with Bama five years ago that came up five yards short as the clock expired. We think of an “immaculate reception” that propelled the War Eagles into the history books. And, we look back at an SEC title that has been gathering dust for a solid decade.

It’s down South football, and we want to win. It’s frustrating to hang your hopes on next year with each passing season. Four months ago, the Bulldogs were feared. The college football talking heads were saying Georgia was the team to beat in 2015. With a Heisman frontrunner anchoring the offense, the boys in Red and Black were poised to run through any team they lined up against.

Then came Bama, and we looked on in agony as Nick Chubb’s knee flopped around on the Tennessee sidelines as a big lead slipped away. A win over Missouri was little consolation as the win relied entirely on the leg of a field goal kicker. Then, the Bulldogs looked lost as Florida embarrassed the Dawgs for the second consecutive year.

The most steadfast fans were shaken as it took nearly a month to even score a touchdown. And, though they beat Auburn and Tech, the wins were never triumphant. The Dawgs looked weak and ill-prepared in games that should have been easy. It’s been a tough year to be a Georgia Bulldog.

I sat in the stands at Sanford Stadium a few weeks ago with a fellow alumnus and old friend of mine. We had beautiful seats on the 50-yard-line to watch the Dawgs face an up and coming rival, The Georgia Southern Eagles. In years past, this game would have been a gimme, but in 2015, we bit our nails as the game stretched into overtime and we cheered at the end because we didn’t lose to Southern.

Following the game, I talked with my friend and fellow UGA English grad about the still brewing situation with Coach Mark Richt. We agreed that we’d be perfectly content to see our beloved coach remain in Athens for many years to come. After all, you can’t blame a coach when his star tailback blows out his knee, and there’s only so much a coach can do when a promising quarterback buckles under pressure. My friend said the calls to fire Richt was a reflection of our culture’s sense of entitlement. And, I think he might be right.

Still, I wasn’t surprised when the news broke on Sunday. The fans have been begging for Richt to go, and UGA finally obliged. Other coaches win national championships and don’t last as long as Richt’s reign at Georgia. Their championship trophies and rings are also often stained with memories of criminal allegations and scandals. And, that’s why these are sad times for the Georgia Bulldogs.

Maybe we’ll get what we wished for, but how much is that title really worth. Other teams win championships. Then they settle into a revolving door of coaches and losing records. In a few years, Georgia fans may find themselves wishing for another mediocre nine or ten win season.

In a typical press conference following Saturday’s win over Georgia Tech, Mark Richt stood stoic and stated that he was proud of his team and another victory over one of their greatest rivals. He said that he hadn’t heard anything from the athletic director and he had no angst about his future at Georgia. His immediate plans were to hit the recruiting trail and prepare for a bowl game. Less than 24 hours before he was fired, a reporter in the room asked if the UGA coach thought it was “crazy” that coaches like himself and LSU’s Les Miles had to worry about losing their jobs at the end of a successful season. Richt replied poetically,

“It’s exciting to win. It’s exciting to spend yourself in what we consider a worthy cause and come out with a victory. Of course, there’s the old Theodore Roosevelt quote about it’s not the critic who counts. It’s not the man who points out where the strong man stumbled, or where the doer of deeds could have done them better. The credit belongs to the man who is actually in the arena, who’s been to battle. Win or lose, at least he wasn’t one of those timid souls who know neither victory nor defeat. So, we know we’re in the arena, and we’re going take shots. It’s part of it, you know, and I’m not saying we shouldn’t take shots. I’m not saying people shouldn’t say what they think. If people think a certain way, then they’ve got a right to say what they think. If fans don’t like what they’re seeing, they have a right to do that. I mean, we love the fans and their passion, and we want them to get excited about Georgia football. And when we don’t win, they hurt. When we hurt, they hurt.” 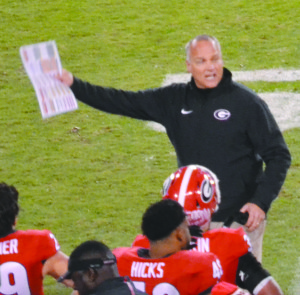 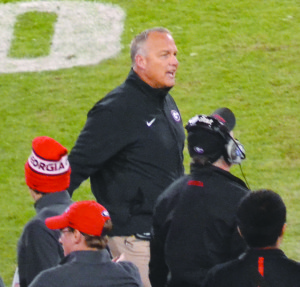