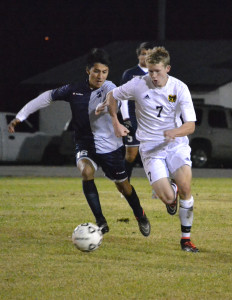 The 2015 soccer season began in the bitter cold last Friday evening as the Worth County Rams hosted the Tift County Blue Devils at Milt Miller Field in Sylvester. The girls took the field first in a contest that was called early as the Lady Devils reached a 10-0 lead in the second half.

With a big moon rising over the duck pond below the stadium, the temperature dropped into the upper 30s as the boys took field.

The boys fared better that the girls, but they still struggled to move the ball across midfield and into shooting range. Meanwhile, the Tift team was on the attack for most of the first half. A corner kick with 22 minutes remaining in the opening period bounces around the goal a few times before slipping in and the Devils took the lead, 1-0.

Two minutes later, Tift scored again to double the lead. The Rams’ defense tightened up for the remaineder of the half, and the boys returned to the field house for halftime with Tift on top, 2-0.

As the second half began, Tift quickly scored two more points to stretch the lead out by four points. But, the Worth team did not stop battling. The Rams finally scored on a kick from McCaleb and a Seth Souter assist with 17 minutes remaining in the contest.

Still, the Blue Devils replied with one more goal before the game ended to win, 5-1 in the season opener.

Following the game, Rams Head Coach Colby Simpson spoke on the upcoming season, and his expectations,

The loss of goal tender Aaron Sinclair is among the positions that will require an underclassman replacement this season. Coach Simpson has a pair of hopefuls in freshman Alec McDonald and sophomore Tyre McKinney. He says both players are working hard to learn the job, and they both understand that it’s a competitive position to earn. The Worth soccer coach says he plans to have the position tentatively filled by the first region game on February 17 against Dougherty, but the spot will be earned on a practice by practice basis.

“Overall, I believe that by the time the region play hits, we’ll be ready to go. We’re not that deep on the roster, but our athletes are in top shape. Coach Heard has been conditioning them and he is doing a great job.”

Breaking down the region competition this year, like every other sport in 1-AAAA, the Rams will face new opponents, and the method for determining a region champion will be completely different. The region will not be sub-divided, but the Rams will play one non-region game against a region opponent. Then, the Worth soccer teams will play every region team once, and unlike seasons past, every game will count in terms of region ranking.

On Tuesday, the Rams will host Americus-Sumter in the only game against a region opponent that doesn’t count towards the region record this season. Still, the contest will serve as a good indicator of how the Rams stack up against a tough region rival. Then on Friday, the teams will travel to Valdosta to take on the VHS Wildcats. Region play begins next Monday when the Rams travel to Albany to face the Dougherty Trojans.

“Every single player on the team is a leader this year. Yes, you have some that stand out more with technique, skill, and experience. But, we are going to be a unit, and we’re going to work hard together,” Coach Smith explains. “Colby Bearden is going to be my leader in the back, but you can’t really single out one person because they all are so young.”

Adrian McCaleb who scored the only goal of the evening against Tift is returning to the soccer field as a junior after not playing since middle school.

Truthfully, our girls did really well tonight. It might have been 10 to zero, but we are again, extremely young and we are rebuilding a goal keeper that isn’t even a goal keeper. We took a field player that works hard, and I see her benefitting us in the goal. Madison Cook: she’s working to improve her skill, and I look for her to improve quickly as well.”

Simpson says the girls’ team is fit and athletic, but maturity and experience will help improve on technique. Overall, he expects the Lady Rams to compete among the best teams in the region as well.