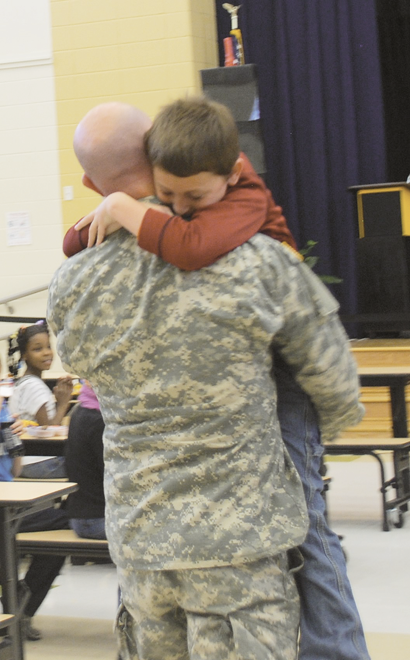 Friday is usually a good day for most. Folks are getting ready for the weekend, heading out to football games or hanging out with family or friends.
This would turn out to be a GREAT Friday for Bryceon Fennell. He had already finished a half day of school and was gathered with his classmates for lunch. Mr. Steven Rouse, Principal of Worth County Elementary School asked to speak with the students during their lunch about Veterans Day. He explained to them what the day meant to everyone but what it especially meant to those that served in the military and to the families of those that serve.
All the students were tuned in to what Mr. Rouse was saying. He explained one of their classmates is missing a parent who is currently serving in the military. It was then that he introduced Bryceon and all his classmates clapped for him.
And then suddenly appears Bryceon’s dad, PFC Spencer Fennell. Fennell has been on leave for 8 ½ months and was in town for a short visit. Bryceon raced to jump in his dad’s arms. All his fellow students were clapping and hollering and all the staff were in tears.
Bryceon’s mom, Megan joined the two for lunch, along with Mrs. Nutt, Bryceon’s teacher.
Thank you to all who  have served and are still serving.  And a special thank you to the Fennell family for allowing us to be a part of your reunion.