The Worth County Board of Commissioners began their regular meeting on Thursday, November 19, by hearing from Sylvester’s Main Street Director Jana Dyke concerning the upcoming Christmas Parade in Downtown Sylvester. The Main Street Director informed the board that the Depot is under construction, so this year, the post parade festivities would be held on Kelly Street. Dyke also asked the commissioners for permission to use the magnolia tree on the courthouse lawn for the annual tree lighting ceremony. Finally, the director reminded everyone that the parade will be held this Thursday, December 3 at 6:00 p.m. with festivities following on Kelly Street. The board immediately voted to approve the request.

After hearing from the Main Street Director, County Administrator Alan Grindstaff addressed the board to mention that the new County Finance Director, Barbara Francis, reported to work on Monday, November 16. Grindstaff also stated that the railroad crossing construction on Carlton Road should be completed by the end of the year.

Next, the county heard from a concerned citizen, Mr. Wright who stated that he has a problem with the maintenance of his road. According to Wright, the motor grader drivers go too fast, causing the blades to chatter and create ripples in the dirt. He also said the weeds were so high that a driver could not see a deer coming. Commissioner Bettye Bozeman asked if public works has paid a visit to his road. At this, the resident stated that public works came out on Tuesday and did a good job, but they didn’t address the weeds.

Moving on to the action docket, Chairman Mike Cosby mentioned that the local chapter of the American Cancer Society was requesting use of the courthouse for their annual “Love Lights a Tree” ceremony to be held on Thursday, December 10.

The chairman also brought up SPLOST applications for a bridge on Dooly Road in the amount of $54,463.11 and Ephesus Church Road in the amount of $51,007.50. The Dooly Road project passed though Mrs. Bozeman opposed as she stated “that’s not the same SPLOST application that we already approved.” With the project on Ephesus Church Road, Commissioner Ken Hall discussed that one property owner wished to be reimbursed for the materials on his fence while two others wished for the fence to be replaced along their property line. All voted in favor of proceeding with the project.

Next, County Attorney Ralph Powell discussed an amendment to the 2014-15 fiscal year budget. According to the attorney, “At the request of the auditor, I have drafted a resolution to amend the 2014-15 budget to reflect changes after the audit was done… to make sure the budget was balanced.”

Powell went on to say that the budget was not increased in any way. However, some departments had overages, and some departments did not spend all of the budgeted money. So, funds were shifted to balance the budget. The board voted unanimously to pass the amendments to last year’s budget.

The board also discussed the 2016 Local Maintenance and Improvement Grant. According to Grindstaff, it would cost approximately $39,000 per mile to pave a street that is 22 feet wide. At that rate, each commissioner could pave approximately five miles of roadway in his or her district. The projects will have to be bid out, so Chairman Cosby recommended postponing a decision on the matter until the next meeting. Still, the board went ahead and approved the LMIG grant. The roads to be resurfaced must be submitted by December 31.

The commissioners also voted to close the courthouse on Wednesday, December 16 from 11:00 a.m. until 2:00 p.m. in order to hold a Christmas party for county employees. Court will be in session on that day and will continue as scheduled as the county administrator stated that the judges were aware of the proposed party and were willing to accommodate.

Finally, the board heard comments from Mr. Ulysses Pace concerning Johnny Aultman Road. Mr. Pace stated that his road was in poor condition. He said he has lived here for over 30 years, and he has always paid his taxes, but he does not feel that he is getting anything in return. There was also some confusion as to which district the road was a part of. District 4 Commissioner Billy McDonald was absent from the meeting due to the Farmer’s Appreciation Dinner being held on the same evening, but the road is apparently located in District 4. District 2 Commissioner Ken Hall stated that he would get with McDonald and the county administrator to schedule a time to come out and look at the road. 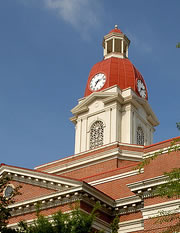