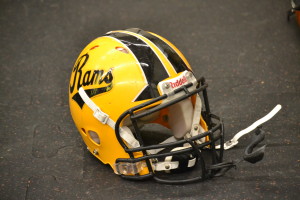 Following an epic win over Bainbridge in the previous week, the Worth County Rams travelled back to Hugh Mills Stadium in Albany on Saturday night to topple another region giant in the Westover Patriots. Stacked with big players on the offensive and defensive lines, and a big quarterback who can air the ball out or tuck and run for yardage, the Pats were expected to be among the contenders battling for a region title at the season’s end.

But, the Rams carried a renewed shot of momentum and restored confidence as they travelled back to Albany field. Last week, despite the victory over Bainbridge just a few days before, Rams Head Coach Jason Tone discussed the outlook for the final three games with the Sylvester Local. Coach Tone said his team had little time to celebrate the upset, because they needed to prepare for the game to come. According to the coach,

“I think the kids are starting to see it. The way we practice, the enthusiasm, the tempo, the effort: it’s all getting better. I think what you’re seeing on the field reflects it.”

Looking back on the season’s wins and losses to date, the Rams coach recalls that his team was up by two touchdowns against Fitzgerald in the opening game, but as his team struggled to perform in the second half, they allowed a good football team to come back and win. Against Cairo, Tone notes that the Rams fumbled a punt and gave Cairo good field position on one drive, then down by two scores, he went for it on fourth down and turned the ball over again to offer a short field for the Syrupmakers.

He says his defense performed well against Cairo, but the offense went three-and-out most of the evening’s drives. Still, Tone believes the team’s effort, especially on defense, was significantly improved over the contest against Cairo last year. The Worth coach isn’t dwelling on the losses any more than the victories this season though, as he prepares for the next game on the schedule.

“I hope that there is a difference in their mindset from game one to game five or six or seven,” Tone says. “If you’re not improving, then there is something wrong, and you need to reevaluate how you’re practicing and who you’re playing if you’re not getting better week in and week out.”

Last weekend in Albany, the Rams did not disappoint as the first quarter offered a full on shoot-out between the two teams. Westover scored first, just three and a half minutes into the game, then there was a six minute lull, then the Patriots scored again with 2:09 remaining in the first. However, on the second touchdown, Worth blocked the extra point attempt, and the Rams trailed, 13-0.

Immediately after the second touchdown, Eric Burroughs found a seam and returned the kickoff 78 yards to find the endzone and put the Rams on the board. Then, Westover returned the favor with a 76 yard kickoff return of their own. With 1:40 left in the first quarter, the Rams were still trailing by 13, but the offense put together a good drive on their next possession and Cameron Farley carried the ball across the plane with 18 seconds left in the opening quarter. When the smoke cleared, Worth was behind by a mere six points in a first quarter that offered 34 points and five touchdowns between the two teams and four touchdowns within two minutes.

The second quarter was a defensive battle between the Rams and the Pats and at halftime, the score remained the same, 20-13. In the second half, the Worth defense proved their potential as they held the Patriots scoreless for the remainder of the game. Meanwhile, sophomore Chris McDaniel would score on a four yard run to put the Rams up by one, two minutes into the third quarter. Then, with only 3:39 left in the game, Farley punched in his second TD of the game to give the Rams an eight point advantage. Westover had no response, and the Worth Rams tallied their second upset in as many games with a 28-20 region victory.

The Rams now stand as the front runner in their sub-region, and if they play well against Americus-Sumter in Sylvester this Friday, they will play the winner of sub-region A for the region title. And, regardless of the region championship, the Rams will be guaranteed a second place finish in Region 1-AAAA. With this standing, Worth will earn the opportunity to host a playoff game.

Where the post season is concerned, Tone says he doesn’t know about tie breakers or what goes into determining post season scenarios. Right now, he is merely focused on winning the sub-region and progressing from there. Worth’s sub-region includes Bainbridge, Westover, Americus, and Dougherty.

As Coach Tone explains, the top ranked team from each sub-region will play each other at the end of the season. Then, the second and third ranked teams play each other to determine playoff spots. Following the Panthers on Friday, Worth will play Thomas County Central in the last game of the regular season. TCC lost to Cairo on Friday night, 13-36. So, Worth could see a rematch against Cairo to determine the region champion.

The Rams now stand at 4-2 overall with a three game winning streak in 1-AAAA games and only a single region loss this season. The final games against AS on Friday and TCC next week will both be played at home. And, as Coach Tone states,

“We come to work every day, and we’ve gotten better from week one to now. And, that’s what you’re looking for.”