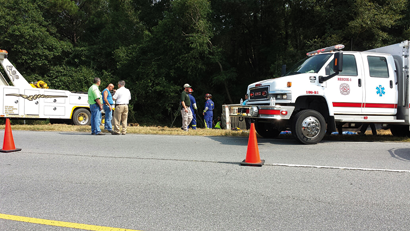 At approximately 9:30 a.m., officials received a call that a semi belonging to DeMott Peanut of Doerun had crossed the eastbound lane over the median of Hwy 82 near Ty Ty and was in the ditch of the westbound lane on fire. Officials on scene believe the driver of the truck was working for Ray Marsh and was headed to Sanderson Farms in Moultrie, where he is from. According to his partner, who was following behind him, the driver (in his early 60’s) never applied the brakes and there were no skid marks. Coroner Johnny Johnson suspects he may have suffered a heart attack. The accident is still under investigation.