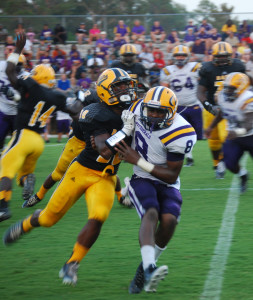 The Worth County Rams opened their 2014 football season with a home game against Fitzgerald Friday night at Milt Miller Field. Coming off of a scrimmage loss to Tift County the week before, the Rams needed to come out and show that they could compete and win football games. Worth County’s Head Football Coach Jason Tone mentioned last week that his greatest concern was being able to finish four quarters of football. He cited this struggle to compete until the end as an element that stood out when looking back on the 2013 season. And, he hoped to see improvements as the new season began.

The Rams came out quick as Brandon Buford broke loose on a 25 yard run to put the Rams up early, 6-0. The Purple Hurricanes were plagued with penalties and mistakes throughout the game, but with less than two minutes remaining in the first quarter, Fitzgerald coughed up the ball. The fumble was recovered by junior defensive back Todderick Jackson, and he ran back into the end zone for another Worth touchdown. Following a successful PAT, the Rams were on top, 13-0.

On their next possession, Fitzgerald strung together a few good runs, and with 12 seconds remaining in the first quarter, the Canes punched in their first TD of the evening. They also missed their first extra point attempt and trailed the Rams by seven as the second quarter began.

Worth looked as though they would again extend their lead as the following kickoff was returned some 85 yards for yet another touchdown, but the points were quickly called back as Worth was called for a targeting penalty. The Rams set up on their own 45 and went back to work. While the remainder of the second quarter was a back-and-forth struggle to gain ground for both teams, Eric Burroughs seemed to be single handedly holding the Canes at bay by breaking up pass plays and tackling anyone who laid hands on the ball.

Finally, with only seven seconds remaining in the half, the Fitzgerald quarterback connected with a receiver for a 25 yard touchdown pass. After splitting the uprights on the PAT, the game was suddenly tied as the teams returned to the locker rooms for halftime.

As the third quarter began, Fitzgerald began to look more comfortable and methodical moving the ball downfield. In the hot, humid South Georgia night, cramps also became an issue for the Rams. According to Rams’ physical therapist Butch Jenkins, one senior did not return after the first half because stomach cramps necessitated running an IV to rehydrate the young man. More Rams began obviously hobbling on the field as the minutes bled off the clock, and Fitzgerald again crossed the goal line on a five yard run with 18 seconds remaining in the third quarter. Now, Worth County was trailing for the first time in the ball game as the final quarter of play began.

Though the defense was giving everything they had to slow Fitzgerald attack, Hurricane running back were taking up big chunks of yardage as they moved down field. With five-and-a-half minutes left to play, the visiting team punched in their final touchdown of the evening and pulled ahead by 14 points.

In their final drive, Worth County moved the ball down inside the 10-yard-line when senior Brandon Gibson had the ball stripped away and turned over. However, a few plays later, a Hurricane running back returned the favor by again fumbling near the 24-yard-line. The Rams recovered and completed a beautiful pass play to an open Todderick Jackson in the end zone. Now, the Rams were back within seven points of Fitzgerald, but less than a minute remained on the clock.

The boys in black and gold set up for an onside kick, but Fitzgerald came up with the ball. Worth County burned their remaining time outs attempting to force the Purple Hurricanes to make a play, but the Canes were able to run down the clock and leave Sylvester with a narrow victory, 27-20.

Though the loss may seem disheartening to Ram fans, there are many positives to take away from this first game of 2014. The Worth team played their guts out, they didn’t give up yards to penalties and turnovers, and they remained a persistent threat until the end. Obviously, the players must condition themselves to resolve these issues of fatigue, dehydration, and cramping late in the game, but we have a team capable of competing for victories each and every week. There is no question that the wins are coming soon.

This week, the Rams will travel to Lee County to take on the 1-AAAAAA Trojans. The game in Leesburg is scheduled to begin at 7:30pm.