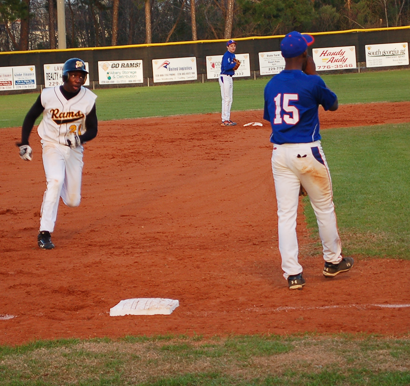 Junior Quantavious Sweeney rounds third to score the go ahead run for the Rams in the second inning Tuesday against Turner County. Unfortunately, Worth would give up the lead in the seventh inning and fall by two points to the Rebels. The Worth County Rams baseball team continued to struggle last week with a pair of losses at home against Miller County Monday and Turner on Tuesday. Since winning the opening game at home against Fitzgerald on February 22, the Rams have dropped five consecutive games to non-region opponents.

On Monday, the boys returned to Pope Park after three games on the road to face the Miller County Pirates. Both teams scored a single run in the first and third innings to remain tied at 2-2 heading into the fourth. However, Miller scored another run in the fourth and another in the fifth, and three more in the sixth to pull ahead by five as the Worth bats struggled to score runs.
In the bottom of the sixth, Denzel Gowdy was hit by a pitch, then took second on a wild pitch, then reached third on a single by Tyler Moore. Then, both Gowdy and freshman Cody Reddell (running for Moore) scored before the inning ended to bring Worth within three runs heading into the final inning.
In the seventh, Miller tacked on three more runs while the Rams scored none and the game ended, 10-4, in favor of the Pirates.
On Tuesday, with rain again threatening, the Rams hosted Turner in their second outing against the Rebels this season. In their first game, played in Ashburn two weeks ago, Worth fell, 1-4, but at home, the boys hoped to turn their luck around.
Again, both teams scored a single run in the first inning. But, the Rams quickly put down Turner’s offense in the second to return to the plate. In the second, Quantavious Sweeney walked before Tyler Moore popped a nice little hanging bunt towards the pitcher that was thrown over the first baseman’s head to move Sweeney over to third.
Next, freshman pitcher Jake Jones poked a short ball into the right-center gap to drive in Sweeney and move pinch runner Cody Reddell around to third. Finally, Chance Bennett hit to the second baseman, who dropped the ball and Reddell scored. At the end of two, the Rams were ahead, 3-1.
Neither team scored in the third or fourth innings, and it looked more promising for the young Worth team with every pitch. But in the fifth, the Rebs managed to score two and tie up the game when consecutive ground balls to left and center field skirted under the gloves of Ram outfielders.
Neither team scored in the sixth, and it looked as though the game may stretch into extra innings, but with two outs in the top of the seventh, Turner scored two more runs on a hard hit fly ball to the left-center gap. Worth failed to answer in the bottom of the inning, and the game ended, 5-3.
Following Tuesday’s game, Rams Head Coach Will Smith commented, “We made a couple of errors and we turned singles into triples, back to back. When you do that, they score, and that’s not a way to finish strong when you’ve got a 3-1 lead in the fifth inning when your pitcher’s throwing strong.”
The Rams also traveled to Fitzgerald last Friday evening for a rematch against the Purple Hurricanes. Worth beat Fitzgerald, 7-3, in the first game of the season. Due to the USPS rerouting mail to a processing facility in Florida after the Albany plant recently closed, The Sylvester Local was unable to provide details for this third game before the press deadline Friday. Details from Friday’s game will be available on our website, www.thesylvesterlocal.com , and in next week’s issue of The Local.
After Tuesday’s game, the Rams stand at 1-5 on the season so far. Tuesday, the boys traveled to Albany for their first region contest of the season against Dougherty. On Thursday, the boys return home to face the Baconton-Charter Blazers at 5:45 p.m., and on Friday the team will return to Albany to face the Monroe Tornadoes.