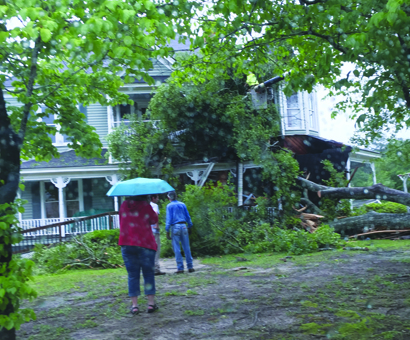 Bucket trucks lined Isabella Street Monday as the sound of chainsaws rang out under the still threatening skies. A day before, Worth County had been placed under a tornado watch as another band of severe weather swept across Southwest Georgia. Heavy rains falling onto an already saturated ground and a strong gust of wind at approximately 1:30 p.m. proved too much for a pair of old trees on historic Isabella Street, and a pair of home owners on the old Southern road paid the price.
Jeanie Carter at 703 Isabella said she was sitting in the living room with her husband Carey watching a Western movie when the T.V. suddenly flickered and they heard a loud rumble. Then they felt the ground shake as they peeked out the back door. Carey told his wife in shock, “The cars are gone.”
Though the house itself suffered minor damage, branches did puncture the roof in two places and the porch on the back steps was demolished. However, the couple’s van and car were totaled as the tree fell directly on top of them.
Meanwhile, a block down the road at the corner of Isabella and North Street, the home of Iris and Steve Weidner was also severely damaged when a tree near the sidewalk came crashing into their 115 year old Antebellum home. The couple came from Gwinnett County and had never been to Sylvester before, but Iris wanted to live in a small rural town, and she has family in Florida, so they felt Sylvester would be the perfect fit. They just closed on the house two weeks ago, and had not even moved the bulk of their possessions down from Atlanta.
Weidner was upstairs cleaning and arranging furniture in the beautiful old home Sunday afternoon when the rotten tree came crashing onto the façade of the house. She says the tree was on their “to do” list for removal as they worried that it might someday pose a problem. However, it also sat on the city’s easement, and the city recently removed another tree from the front yard.
Nevertheless, Iris Weidner says she was amazed at the outpouring of support from her neighbors as they brought comfort food and offered to help in any way. Though it wasn’t the welcome to the Peanut Capital they would have liked, the couple realized they had chosen the right community to join when faced with tragedy. While they are still unsure of structural damage to the walls and foundation, they plan to rebuild the historic Sylvester home and have it back among the jewels of Isabella Street within a few years.