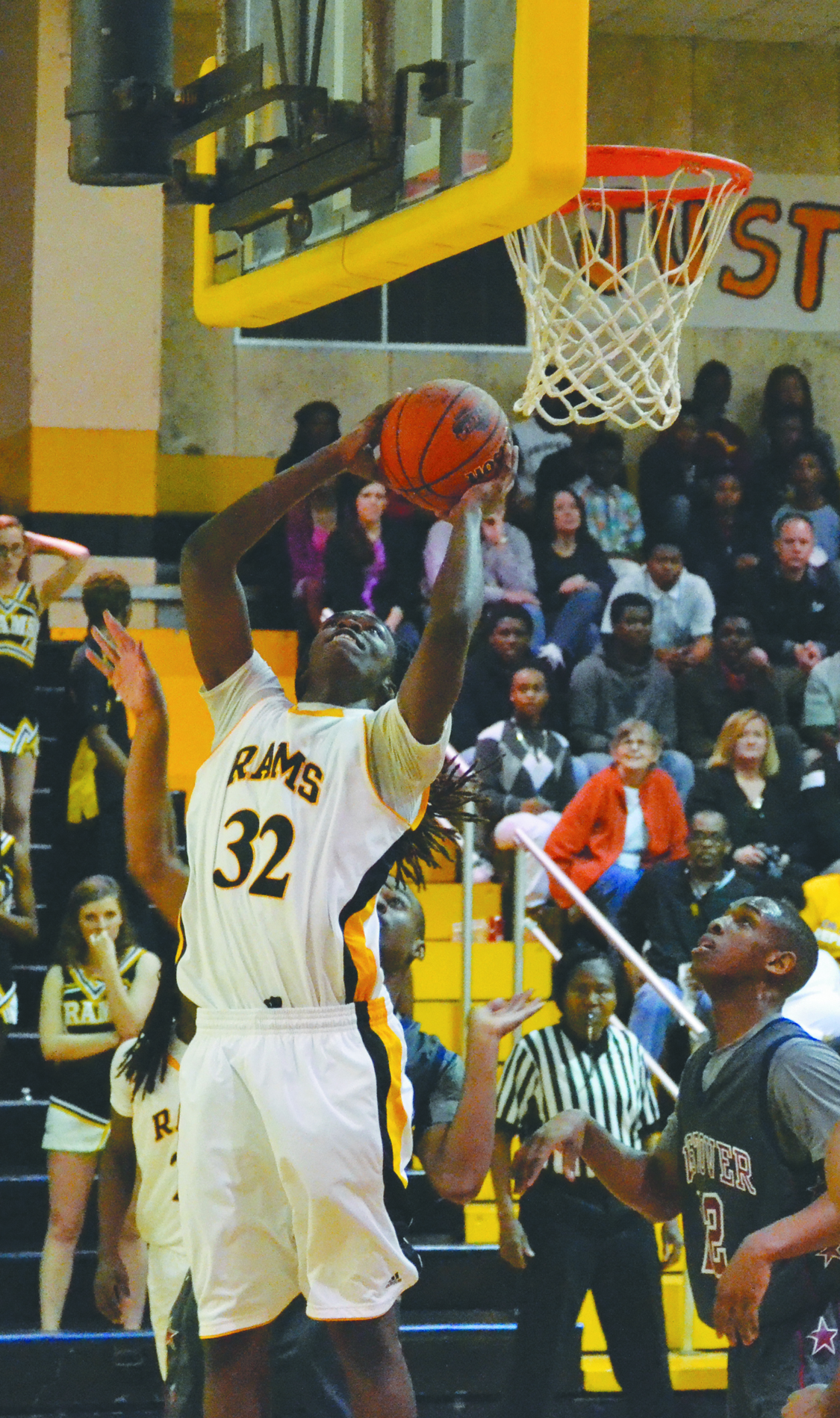 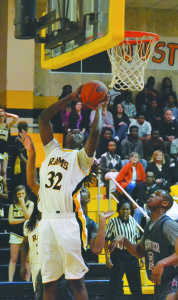 Following a five game win streak, the Worth County Rams basketball team hosted the Westover Patriots last Tuesday in a game that could determine who will play in the region championship. With Region 1-AAAA divided into two sub-regions this year, the Patriots stand atop Worth’s competition. Westover is also ranked second overall. So, a big win would propel the Rams in the 1-AAAA ranks and moving them one step closer to competing in the region title game for a second straight year.

While there was talk of Brandon Moore missing the game with an ankle injury sustained during Monday’s practice, the 6’5” junior was on the court and appeared to be playing at 100 percent. Moore has averaged 20 points and 10 rebounds per game this season, so his presence would be necessary if the Rams hoped to win. The Patriots outscored Worth in the first quarter, 21-14, but the Rams battled back to outscore Westover by nine points in the second quarter.

With just over a minute left in the half, Worth took the lead by a single point. Then as the buzzer sounded to end the second quarter, Kentarious Bailey drained a three from the corner, and the Rams returned to the locker rooms with a four point lead, 41-38.

As the second half began, Worth took the ball first, but the Patriots scored first. After falling slightly behind again, Anfernee McLemore sank a pair of free throws to give the lead back to the Rams. The Worth team stretched the lead out by five points at one point in the third, but they began pushing too hard as Westover began hitting shots. By the end of the third quarter, Worth trailed by two points, 58-60.

The Rams were wounded in the fourth quarter as team leader and play maker Anfernee McLemore was taken out of the game on a questionable charging penalty. Still, they played hard and Junior Kedarious Gaint sank a pair of three-point-shots with under a minute left to draw back to within three points of the Pats lead. Still, they were struggling to come up with offensive rebounds, and as the seconds ticked away, desperation set in. The game would end with Westover on top, 76-69.

While the Rams will play Cairo, Americus, and Bainbridge in the days to come, and all of these teams are ranked ahead of Worth in 1-AAAA, Tuesday’s loss all but assured that Westover will claim the sub-region and play for the region title.

Then on Friday, the Rams hosted their third consecutive game the Early County Bobcats came to Sylvester. The Rams won big in their second game of the week, 86-70. On Saturday, the Rams travelled to Thomas County Central to take on the Yellow Jackets in their first contest of the season and for the first contest between the teams as 1-AAAA rivals.

Ultimately, the Rams destroyed the Yellow Jackets, outscoring TCC in each of the first three quarters, and Worth County won the game easily, 85-54.

Following the game in Thomasville on Saturday, the Rams now hold a 12–6 overall record and an even 4–4 record in region play. The Worth basketball team will have another three-game-week as they travel to Cairo on Tuesday to play the Syrup Makers in their first contest of the season. Wednesday, the boys travel to Bainbridge for a rematch against the Bears. In their first meeting on December 13, the game went into overtime, but the Bears came out on top, 96-93.

Then on Saturday, the Rams will return to WCHS in Sylvester to host the Americus-Sumter Panthers in their second match up of the season. In the first game against the Panthers, the Rams lost by a single point, 64-65. However, the home court advantage could turn the tables in the rematch as the Panthers venture into Ram country. At any rate, with three big region games looming in the coming days, Worth County will have to stay focused and play their best games of the season if they hope to shake up the region rankings before the regular season comes to a close.