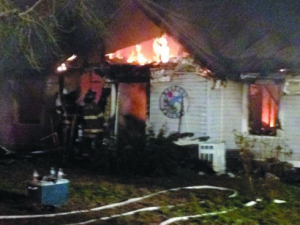 On Wednesday, December 30, 2014 Worth County Fire Rescue received a call to a house fire at 1305 Gibbs Road at approximately 10:05 p.m. Fire crews arrived at 10:15 p.m. The fire apparently started when the resident began cooking and then fell asleep in her bed.

According to Worth County Fire-Rescue Lieutenant Bryan Altman, the house was 50 percent involved upon arrival of the first responding engine.

The resident of the home, Brittany Michaud, suffered burns to the arms, back, chest, and face as well as smoke inhalation. Michaud was sent to the burn center in Augusta. Michaud escaped the fire by busting her double paned window of her bedroom. Two dogs also perished in the house fire.

David Saunders reported that his son kicked in the door in an attempt to rescue Michaud. However, she had already escaped the structure.  According to Lt. Altman, the structure was an older style building with tongue and groove ceilings which can make fire operations somewhat difficult, but Altman said that the fire crews, on-duty and off-duty personnel, did a spectacular job of handling the incident on Gibbs Road.

Anyone interested in helping the Michaud family you can call Donna Epps at 229-395-5685. Michaud lost all she owned in the fire late Wednesday night. They are asking for donations of clothes, dishes, furniture, bathroom items or anything for daily living. You can help financially by going to “Support for Brittany” at gofundme.com.