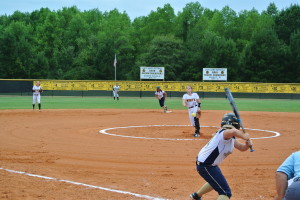 The Worth County Lady Rams gained another pair of dominating victories last week against the Turner Lady Rebels and the Westover Lady Patriots. As the Worth girls continue their campaign for a region championship, only five gains remain until the region tournament begins in Albany on October 7.

After taking down the Lady Rebs, 12-4, in a non-conference game at Turner last Tuesday, the Lady Rams travelled to Albany on Thursday for a region battle against Westover. And, the Worth team wasted no time in establishing an early lead by driving in a pair of runs in both the first and second innings. Then, the girls added a run in each of the third, fifth, and sixth innings for a total of seven runs scored as the final inning began. However, in the top of the seventh, the floodgates opened for the Worth offense and six more Lady Rams crossed the plate for a 13-1 win over the Lady Patriots.

Caroline Newton, Brinsley Graddy, Lindsey Toneygay, and Courtney Hamilton all drove in runs for the Worth team Thursday. Meanwhile, Newton struck out nine Westover batters from the circle. The Worth ace gave up five hits and two walks on the day, but she allowed no earned runs.

Adding these wins to an already impressive 2014 season, this team comprised mostly of freshmen and sophomores is beginning to earn some recognition as one of the best performing teams in the state. Indeed, Worth’s arsenal of weapons includes five of the top 20 batters in the state. Senior Courtney Hamilton is ranked twentieth with a .333 batting average on the season, while Taylor Layfield is ranked twelfth with an incredible six homeruns for a .383 average. Brinsley Graddy is currently ranked tenth on the list of sluggers with a homerun and a .388 average. Lindsey Toneygay has hit a pair of homers and driven in 17 RBIs to hold a .426 batting average and an eighth place spot in the rankings, and Caroline Newton has gone yard four times and driven in a remarkable 25 RBIs for a .469 batting average. Newton also holds the highest slugging percentage among the top 20 batters at .918.

After a week on the road, Worth will host two games this week against the 1-AAAAAA Lady Trojans from Lee County on Tuesday. On Thursday, the girls welcome the Dougherty Lady Trojans for another region contest. Wednesday, the Lady Rams will travel to Americus to face the Lady Panthers.

With the regular season winding down, the Worth team is riding a six game win streak after losing to Bainbridge back on August 26. The ladies now hold a remarkable 15-2 overall record on the season and a 5-2 record in region play. Because of their tough loses to the region’s new opponents from Thomas County Central and Bainbridge, the team’s post season fate may now rest in the hands of the Lady Bearcats from Bainbridge.

The TCC Yellow Jackets remain undefeated in region play, while Bainbridge has only lost to TCC. The Rams need the Lady Bearcats to lose a region game to propel Worth into second place among Region 1-AAAA opponents. A second place seed heading into the region tournament would offer a number of advantages for the girls as they maneuver through the tournament.